Random, but it made me laugh - today, over in Defamer's run-down of the weekend box-office ($100 million worth of tickets were sold for Kung Fu Panda and that Zohan movie combined. Let that soak in. And JA wept.), here's how they wrote up The Strangers 5th place take:

Well it made me smile. And it reminded me that Haneke's Funny Games V.2.0 comes out on DVD tomorrow, so all y'all slackers who missed it might wanna take it in at home, alone, in the dark. Bwah-ah-ah. 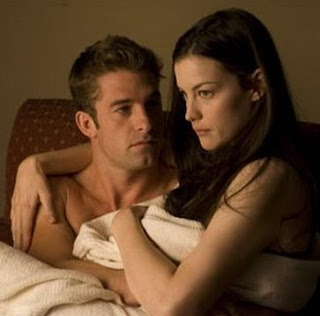 And speaking of The Strangers... well it's been a week and a half since I saw it so it's a bit murky, what with all that vacationing in between, but I thought it was pretty fine a fright flick. I preferred it to Ils (Them) actually, and the difference be this: The Strangers devotion to letting us know the characters first, before fucking with them, trumped Them's devotion to straight-up scares without all that meddling character development. I really dug the first half-an-hour of The Strangers, in which the fissures in Liv Tyler and Scott Speedman's characters' relationship are revealed, and it made the horror to come more horrifying, for me. I appreciate what Them did - cut the character fat and deliver a lean mean killing machine movie - but I preferred The Strangers take.

Also, Owen Gleiberman (his review) and Richard Roeper just need to stop reviewing horror movies, period. Those fools don't get it at all.
.
Who? Jason Adams When? 2:34 PM

you are right. This should have been a movie that t-porn critics should have loved. The writing and acting in the first chunk was far better than the rest of the movie. Which means that the real Scott should get lots of work. What happened to loser Scott?

"loser Scott" as you refer to him is or was on that TV show The Unit the last I'd heard of him... IMDb has him listed in some TV miniseries called "The Last Templar" whatever that is... so okay, in this instant, he's a little loserish. But he's still adorable.

Why the hate for Kung Fu Panda?

Oh, and I liked The Strangers, too. Had to drive out of town to see it, like we did for Prom Night. Yeah, that's right. We made an effort to see Prom Night.

I agree about the character build-up at the beginning. You rarely see that kind of interaction in horror flicks.

The most enjoyable part of the movie for me was the lady sitting behind us. She kept screaming her head off and asking her boyfriend stupid questions. My favourite was "Did she trip?" asked immediately after Liv Tyler very obviously tripped.

steve, I must admit that all the positive reviews for KFP have gotten my bias towards it a little bit lowered. But basically it just comes down to this: I fucking loathe Jack Black. I tried to get past it for awhile because he kept attaching himself to filmmakers like Peter Jackson or Michel Gondry that I admire, and he kept spitting in my face how much he sucks. So that's where my KFP dislike comes from, basically.

That woman sounds hysterical. It's a thin-line that audience participation walks, sometimes it can hit you as funny, sometimes it's annoying, so I'm glad she didn't ruin the movie for you.

I can appreciate that. I'm coming at Kung Fu Panda as both an animator and kung fu fan in awe of what they were able to accomplish. I wish I was able to put that much stretch and squash in my work. Man, some days I miss working on kids cartoons.