5 Off The Top Of My Head - Miss Blanchett 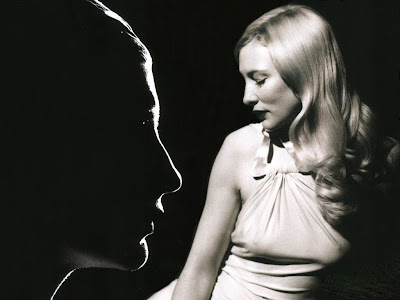 Well I just celebrated her Good German co-star George Clooney's birthday last week with one of these, so it's only fair that I turn my beady eyes upon Cate Blanchett's work today, it being her 39th birthday (not to mention that the boyfriend would kill me if I ignored her).

The first time Cate made herself known to me was Oscar & Lucinda, a film I saw bits and pieces of at least 20 times because I worked at the local art-house movie theater where it was playing in 1997. If that wasn't enough to burn Cate's image into my retinas... well, she made it her goal to burn herself into all of our retinas over the next decade. She's made 33 movies in the 12 years (!) since then, and she's kinda sorta been the best thing about most of them. Next we'll be seeing her get her Natasha on as the villainous KGB dominatrix Irina Spalko who's after Indiana Jones' goodies in The Case of the Crystal Pepsi, which comes out next week. But for now, a look at my five favorite performances by this insanely gifted lady, in no specific order. 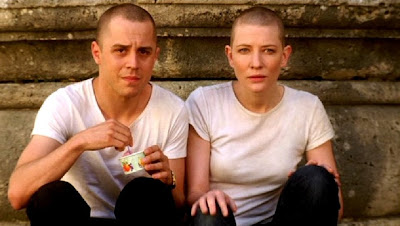 "I don't want to escape punishment.
I've killed four innocent people
and I want to answer for that,
but before I do, I want to kill him." 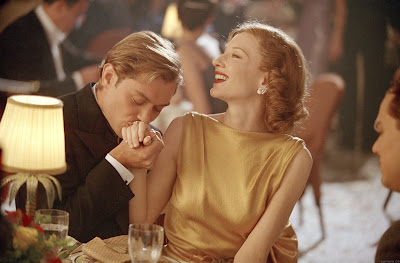 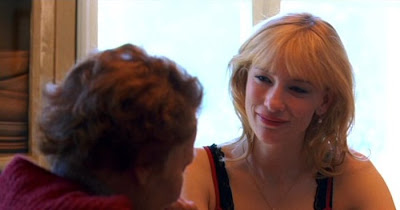 Sheba Hart, Notes on a Scandal

"You're barking, fucking mad. You don't know how to love.
You have never, your whole life. Me, Jennifer Dodd.
You're nothing but waste and disappointment!
You bitter old virgin. You're lonely for a reason.
They loathed you at school, all of them.
I was the idiot who bothered, but only because
no one told me you're a fucking vampire!
So what is it, Bar? You want to roll around
the floor like lovers? You want to fuck me, Barbara?" 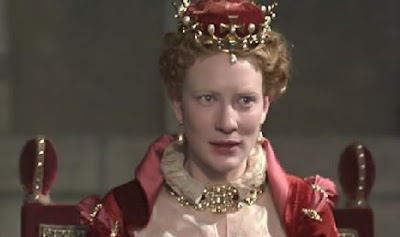 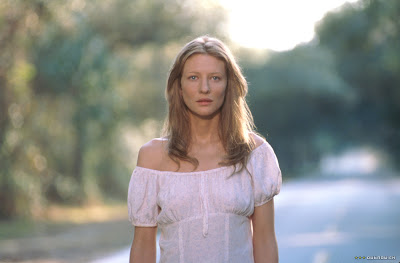 "It's a bad word for something nice."

Again, like with Clooney, the final spot goes to a sentimental fave... I really dig the gothic ridiculousness of The Gift, and Blanchett's terrific in it. She's bolstered by a gallery of glee-inducing supporting work - Hilary Swank, Keanu Reeves, and Katie Holmes' tit-explosion - but she manages to ground the ridiculousness admirably.
I still haven't seen I'm Not There, so I can't say what I think of her supposedly astonishing mimicry of the Dylan mystique. Blame Netflix's "Very Long Wait" bullshit, not me!
.
Who? Jason Adams When? 10:03 AM
Labels: 5 Off My Head, birthdays, Cate Blanchett, lists

i like her in The Gift too. But when you say "glee inducing" about the supporting performances do you mean because they're so bad that they're good??? because honestly.

...everyone but CATE & KATIE is pretty terrible in that movie. I think it's the performance that convinced me that Hilary Swank was a shitty actress who lucked out and tricked everyone into thinking she was brilliant. that she continues to trick everyone is maddening ;)

I most definitely mean "glee inducing" as campy, at least for Swank and Holmes - I do not mean it for Keanu; I actually think Keanu gives a terrific performance in the movie, one of his best (not that there's a whole lot of competition for that title). I found him to be completely threatening and creepy and believable as an abusive redneck drunk. It's not the most nuanced performance, sure, but he scared me and made me stop thinking "That's Keanu trying to act" for a change... hey, the bar's low with pretty, pretty Keanu.

But Hilary Swank is HILARIOUS in the movie, and I don't think she had any idea that she was being so bad (unlike what she did in The Black Dahlia, where I think she knew how bad she was being).

Regardless, I'm almost always with you on the Swank bashing train, Nat - my guts turn into lava when I think of two Oscars on her mantel and NONE (NONE!) for my beloved Winslet.

Cate is a goddess. The way she became Kate Hepburn in The Aviator is nothing short of astounding.

Was Blanchett in The Gift? I didn't see her unless she was hiding behind Katie Holmes' tits.

I especially loved Cate in The Life Aquatic. All preggers and saying effing all the time. Man, I love tha woman.

She should've won the Oscars for Notes on a Scandal and Elizabeth. Sheba Hart is currenly my favourite performance from Cate Blanchett.

I really wanna see I'm Not There

My favourite Blanchett moment is the part in Notes when she comes out of the house and it's surrounded by reporters and she just FLIPS. "Here I aaaaaaaaammmm!!!!". Rich at fourfour made a great .gif of it, I remember.

Apart from that, my favourite is Galadriel.

Catherine - I had a really hard time not using that as the quote for Notes, but I figured it'd been co-opted well enough by that hilarious post of Rich's. Galadriel was a close #6 on my list. :)