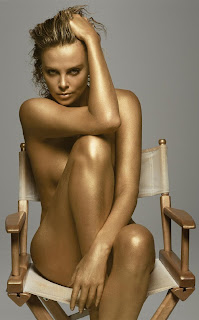 Weird thing is, just this very morning I was sitting here at my desk thinking I should do a post on Charlize Theron, because I really, really like her, like a lot, and I never ever post anything about her. I was thinking about her last week, too, in relation to Katherine Heigl who's revealed herself to be a real she-beast; in contrast, Charlize just seems wonderfully cool.
For one, I thought she was phenomenal in Monster and deserved that Oscar. But the things that come to mind when thinking of her as a real-life person, as opposed to her work, are these:

B) her endearingly goofy and real-seeming affection for boyfriend Stuart Townsend and the fact that she seems to be keeping true to her statement that they won't get married until all people (i.e. us homos) can get married

These factors add up to a deep well of affection from me to her; whether this is a well-crafted public persona or not, she's just given me the impression that she's the sort of hip lady I'd want to hang out with. I like her bunches.

So this news from BD today... I don't really know what I think of it.

"In a recent interview with Boston.com to promote her upcoming film SLEEPWALKING, it was revealed that Charlize Theron is set to produce and star in a remake of Park Chan-wook's astounding Sympathy for Lady Vengeance, which is now on DVD as Lady Vengeance from Tartan Films. No other details were revealed. Only time will tell if this gets off the ground as the OLDBOY remake has fallen through the cracks." 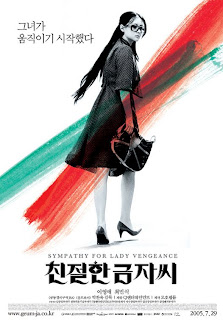 Sympathy For Lady Vengeance is an amazing film. If I were doing a list of my favorite films of this decade, SFLV would place very, very high. I've oft expressed my worship of its director Park Chan-Wook; SFLV might be my favorite of his five films, all of which I love dearly.

All that said... I'm not as angry, I don't think, at the idea of it being remade as I am over, say, Rosemary's Baby. Is it just the Charlize-attachment factor? When Oldboy was rumored to be remade with Nicolas Cage in the title role I nearly barfed up my insides. It could be a fantastic role for Charlize. And the fact that she even knows of SFLV and wants to take it on does just amp up my love for her more - of course she's a fan of Park's films, I realize! She's just that cool.

I do think she is great, but seems a bit big to play this character. If Charlize is in a prison movie I just see her as kicking ass and taking names.

I don't know about this.

I love Charlize. But she has already killed Aeon Flux.

And by the way, I love The Shinning Screengrab. One of the most disturbing scenes in the movie.

Again with the sexy picture, Jason! Are you SURE you're gay?

Funny you should mention your fact no. 2 because a certain other famous couple (who's nickname sounds like "shmangalina") have announced they're engaged so they gave up on the whole "we'll only get married when gay marriage is legal" shtick. bah-bow.

But, yes, I adore Charlize too and I really liked Lady Vengeance, so...

Yeah, two pics in a row with hot, sexy women. Plus counter-programming with Maggie-it seems as if Ja may be going over to the dark side...

Yeah, she's pretty cool. It's a shame that she hooked Stuart Townsend, who should have been my future husband, but I digress. She shouldn't have had that nude scene in Monster, though. I think even straight guys would agree with me on that (I'm not to sure about the lesbians, though).

Am I the only one that actually liked Aeon Flux?