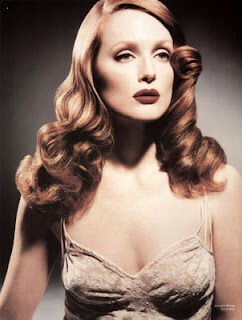 I love an angry Julianne Moore. It makes me think of that scene in the pharmacy in Magnolia - "Where's your fucking decency?!?" - and then my heart fills up with sunshine and cartoon teddy bears. Here's Juli on this Elliot Spitzer nonsense, via People:

"A f---ing embarrassment" is how Julianne Moore, once a fan of the former attorney general, termed the politico's involvement in a prostitution ring – for which it is anticipated he will resign on Wednesday.

"I'm really pissed," the fiery New Yorker, 47, told PEOPLE during Tuesday's TSE flagship SoHo store opening. "I honestly don't care where or how people have sex, or with whom, but prostitution is illegal. For someone whose got such a reputation for having a real attitude towards crime, you have to walk the walk. I'm sorry."

Juli's pissed! Spitzer better watch his back; she's not somebody to mess with. She will cut a bitch.
.
Who? Jason Adams When? 3:59 PM

Holy shit--that picture! *jawfloor* I think she just impregnated me.

The question is why prostitution is illegal. It should be legal and taxed like in certain other countries. But I do agree with Ms. Moore on the hypocrisy of it.