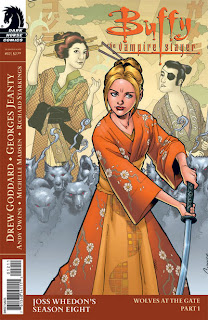 Man, I wish I'd seen this after I went and bought the comic tonight after work, but if I'm being spoiled, so are y'all! Damned New York Times. Anyway, in the new issue of Buffy's comic-based eighth season, out today, Buffy Summers goes all Willow and gets her same-sex experimenting on! From NYT:

"Buffy Summers, the vampire slayer of film, television and comic books, is all confidence in fighting the forces of darkness. But she’s often shakier in her intimate relationships.

Her liaisons include Angel, a vampire who is arguably her true love; Riley, a military operative who combats the supernatural; Spike, another vampire; and Parker, a fellow college student and one-night stand.

In a new issue of the “Buffy the Vampire Slayer” comic book series, being released Wednesday, Buffy sleeps with a fellow slayer. And, oh yeah, she’s a woman."

Well duh. All Slayers are women, NYT, but I guess everybody's not a Buffy geek. If everybody was a Buffy geek, the goddamned show would probably still be on. Although one has to wonder if that'd be a good thing. Aaaaaanyway, good on Buffy (although the girl always has so much frickin' angst attached to her sex-life, poor thing, so maybe not). Here's what Joss says on the subject:

"But before fans start blogging frantically, they should know that Mr. Whedon is clear where this is headed. “We’re not going to make her gay, nor are we going to take the next 50 issues explaining that she’s not. She’s young and experimenting, and did I mention open-minded?”"

Ohmigod, I'm blogging frantically! Joss is talking to me.
.
Who? Jason Adams When? 5:32 PM

Aw, c'mon, one doesn't have to wonder anything. Season 7 was f'ing dreadful, finale notwithstanding.

Sounds like Whedon's going back to the well here, but then, he treated it as more of a character reboot with Willow, so maybe he's got something new to say with this.

Something besides "Buffy's a selfish jerk in her relationships," I mean. That would definitely be going back to the well.