Leave The Suspense Bomb Be! 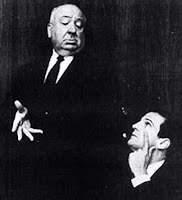 You know what I'm seriously ready for a moratorium on? The ol' "Hitchcock defined the difference between 'surprise' and 'suspense' by contrasting two 'there's a bomb under the table' scenarios" chestnut. If you don't know the tale - and please, for the love of Hitch, know it now - it's from the famous interview between Hitch and Francois Truffaut captured in the must-own book succinctly named Hitchcock, and here's what Hitch said:

"There is a distinct difference between "suspense" and "surprise," and yet many pictures continually confuse the two. I'll explain what I mean.

We are now having a very innocent little chat. Let's suppose that there is a bomb underneath this table between us. Nothing happens, and then all of a sudden, "Boom!" There is an explosion. The public is surprised, but prior to this surprise, it has seen an absolutely ordinary scene, of no special consequence. Now, let us take a suspense situation. The bomb is underneath the table and the public knows it, probably because they have seen the anarchist place it there. The public is aware the bomb is going to explode at one o'clock and there is a clock in the decor. The public can see that it is a quarter to one. In these conditions, the same innocuous conversation becomes fascinating because the public is participating in the scene. The audience is longing to warn the characters on the screen: "You shouldn't be talking about such trivial matters. There is a bomb beneath you and it is about to explode!"

In the first case we have given the public fifteen seconds of surprise at the moment of the explosion. In the second we have provided them with fifteen minutes of suspense. The conclusion is that whenever possible the public must be informed. Except when the surprise is a twist, that is, when the unexpected ending is, in itself, the highlight of the story."

Yes, it's a terrifically well-put explanation by a man who knows from which he speaks. But for Alfred's sake, if I have to read another review of a horror movie or thriller that lays out the entire rigmarole again, I might go unearth the man's bones and start smacking reviewers in the face with them.

What brought this rant on? Besides my lack of much-needed stabilizing medication, of course? It's two separate review/articles on The Orphanage that I've read this week which both felt the need to trot this tale out anew. First off was Roger Ebert, who I swear has used Hitch's definition in a thousand reviews before, and ought to know better. Here's what Ebert says:

"Now here is an excellent example of why it is more frightening to await something than to experience it. "The Orphanage" has every opportunity to descend into routine shock and horror, or even into the pits with the slasher pictures, but it only pulls the trigger a couple of times. The rest is all waiting, anticipating, dreading. We need the genuine jolt that comes about midway, to let us see what the movie is capable of. The rest is fear.

Hitchcock was very wise about this. In his book-length conversation with Truffaut, he used a famous example to explain the difference between surprise and suspense. If people are seated at a table and a bomb explodes, that is surprise. If they are seated at a table, and you know there's a bomb under the table attached to a ticking clock, but they continue to play cards -- that's suspense. There's a bomb under "The Orphanage" for excruciating stretches of time."

And today, I'm all innocently reading an article in the New York Times on the film, and come across this passage:

"Movie terror has always been a kind of alchemy of ingredients, at least when the sought-after effect is having an audience peel the cushions off the armrests. “Hitchcock famously distinguished between surprise and suspense in movies,” said David Sterritt, author of “The Films of Alfred Hitchcock” (Cambridge Film Classics). “You see people eating in a restaurant, and suddenly a table blows up. That’s a great surprise, and the audience jumps, but it’s over in a flash.

“Then take the same scene, but this time the movie shows you there’s a bomb hidden under a table. Now you squirm as you watch, wondering if the people will discover it, hoping they’ll maybe finish lunch and walk away, etc. That’s suspense, and even if the money shot is still the explosion, you’ve built a longer and more excruciating sequence.”

I reproduce both of these instances in their entirety because that redundancy is what's irritating me here. I love this concept of Hitch's, I do; but give it a rest, world! How many times must it be dragged out and flogged for the crowd?

I think what's really and truly getting under my skin is... no. The Orphanage doesn't deserve this chestnut. It most certainly tries to subscribe to this school of thought; it goes for its tension through character and environment and atmosphere, but I found it, more often than not, flat where it should be tense, and missing the mark when it came to attempting to release what tension it had developed. It's by no means an awful film, and I do applaud it for working these old-fashioned sensibilities. I do find a few of the sequences more frightening in retrospect, applying "what should have been" to them, but that's not especially useful when, in the theater actually watching the film, it wasn't getting me. It had its mind and heart squarely in the right place. But it never, to my eyes, really delivered.

Perhaps, I could reason, I'm becoming jaded at this point by having seen so much horror that it's starting to get tougher to frighten me. I'm not saying I need something stuffed with meat and gristle a la Hostel or - god forbid - Saw, but that I've seen and studied these concepts for so long that my reaction is too distant from the average viewer's. But then, two recent ghost 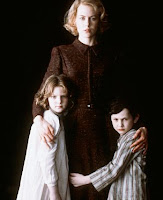 stories, both from 2001 - Guillermo del Toro's The Devil's Backbone and Alejandro Amenábar's The Others - terrified me, so I wouldn't say it's impossible to crack my cool demeanor. Those two films are the most apparent recent forefathers to The Orphanage - along with Pan's Labyrinth, but less than the marketing department would have you believe - with roots leading back to The Innocents and The Haunting, so it's certainly slid itself into esteemed company. But, for me, it worked far less than any of these other classics of the genre. And if Hitch's bomb never goes off, if it merely spits out some smoke and an exasperated sigh, then I think we ought to leave his little tale alone for the time being. Deal?
.
Who? Jason Adams When? 2:44 PM

I'm surprised you are so blah on the orphanage. I think the film is one of the most successful I've seen at creating ambiguity around the causes of the events. Both the supernatural and psychological explanations for what happens are satisfying--that's a rare thing.

I agree with you on both of those counts. It's not a stupid movie, by any means. The problem I had with the film though was of a more fundamental nature, especially when talking about a horror movie - it just didn't scare me. I jumped a couple of times, but I never felt drawn in or involved enough to feel any terror with what was happening on-screen. It's like the pieces were there but, for me, it never weaseled it's way into my brain.