--- Nothing says "Visionary" like Brett Ratner - Seems Universal's considering Mr. Rush Hour himself as their replacement for Mark Romanek on The Wolf Man. And whatever geek-fit I might've thrown over this, Harry Knowles does the spit-flinging better. I guess they want another Van Helsing on their hands then? Universal seems totally committed to raping their classic monster history, huh? 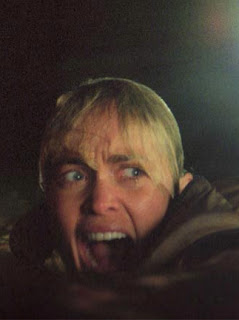 --- Rogue Not Rogue Any More - Well, sort of. Dimension, aka the Weinstein Twits, have revealed they're really truly gonna release Greg McLean's giant-croc movie Rogue... sometime this Spring. Way to be definite there, Harvey. Sometime in 2008, maybe! Really! Or, ya know, before the film-stock dissolves. Maybe. We'll see.

--- As expected, director Matt Reeves is already in talks for the Cloverfield sequel. I'm infatuated with the idea of a sequel taking place on the same night only through someone else's viewfinder, so they'd better go that route. The boyfriend suggested a news crew, and I like that. And I want a glimpse of our heroes from the first film running by at some point. Small demands really, but the vengeance I'll wreak if left unheeded shall be massive! Or... I'll whine on here a lot. Whatever.
.
Who? Jason Adams When? 10:43 AM

Or, what if the Cloverfield critter got tired of NY and worked its way up the coast to Boston? Not that I really care--I'll take any sequel to this little gem!!!