Speak of the Devil... Literally 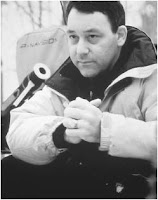 What did I say yesterday?

"I have the feeling [Sam] Raimi's, looking at Spider-Man 3, a little blown out by huge productions and really would like to see him do something small, perhaps horror-tinged, next."

And what has come to pass? From AICN:

"Sam Raimi returns to horror! DRAG ME TO HELL his next flick!

... Sam Raimi has exec. produced many horror flicks under his GHOST HOUSE banner, but for the first time since he started that company up he's actually directing one called DRAG ME TO HELL, a supernatural horror flick he co-wrote with his brother, Ivan.... They wrote it right after ARMY OF DARKNESS. At that point it was called THE CURSE. No real details have come out, but the trades have a blurb about it being about "an unwilling recipient of a supernatural curse.""

Didn't I also say that whatever I decree comes to pass? Do y'all need more proof than this? I am legend, people.