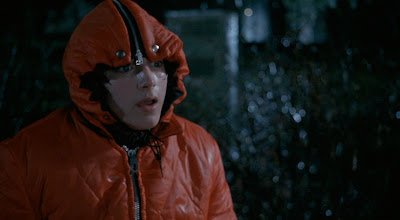 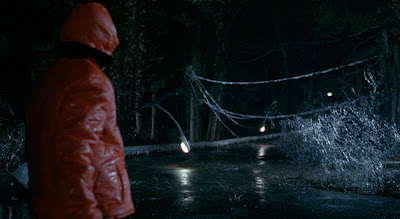 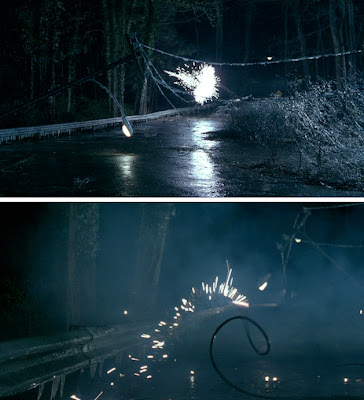 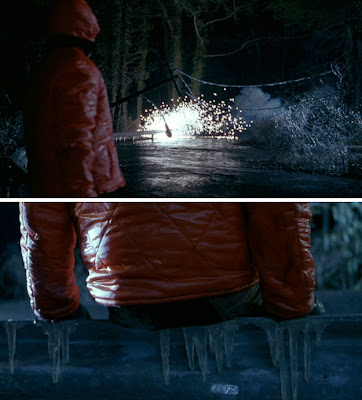 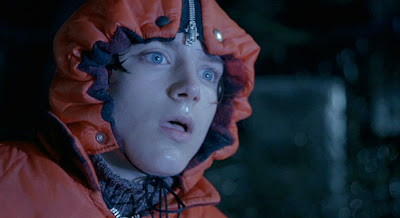 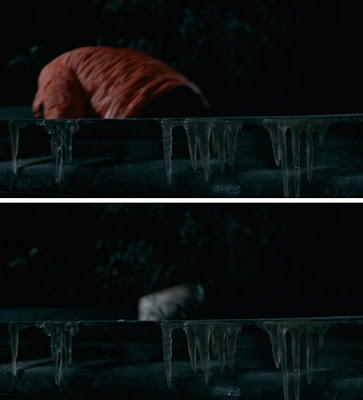 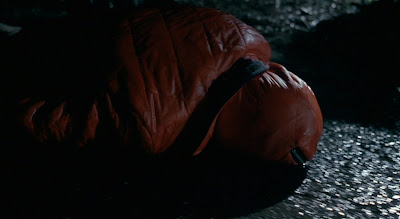 The Ice Storm (1997)
I guess we can consider this a belated Thanksgiving-themed Way Not To Die, seeing as how the film revolves around the splendid holiday and I didn't do one of these last week, so busy was I filling my maw with mashed potatoes.

Anyway, nobody - and I mean nobody! - can tell me that little Mikey Carver's death (uh... spoiler?) in The Ice Storm isn't one of the most affecting deaths ever put on-screen. The accident itself is so haunting - the crisp air, the silence - and so beautifully shot that it's permanently etched itself into my brain. I haven't read Rick Moody's book on which the film was based so I don't know if he describes Mikey's orange parka specifically or not, but if not then the costume designer Carol Oditz [side-note: How did she not receive an Oscar nomination? Not to mention a win. Not just this jacket but so many pieces of this film's wardrobe I can instantly conjure up memories of - Christina Ricci's red cape, Sigourney Weaver's giant wooden necklace, Joan Allen's bubble umbrella, Allison Janney's semi-psychedelic black-and-white "key party" dress] deserves huge accolades for finding such a perfect costume. Not only is it just right period-wise, but - and I'm sure Ang Lee had something to do with this, as well - it accomplishes so much all on it's own. The contrast of its day-glo orange on the black and white scenery is... striking, to put it mildly, and when it does come time for the wires to fall and electrocute poor Mikey the parka itself speaks for the violence and horror - that shock of color, if you will - of the moment while Lee - naturally - keeps all else restrained. And from a practical standpoint, when Ben Hood (Kevin Kline) comes upon the body a little while later, the costuming choice makes Mikey all the easier to spot. It's a perfectly rendered scene - both tragic and beautiful - in a film full of such moments.

Love this film (and this post). The Ice Storm was the first "grown-up" film I ever saw, and it's kind of engraved onto my brain. Can I ask what programme you use to get screencaps?

Like everything I do, I think I have a terribly roundabout way of doing this: I have a Mac, and I use the VLC media player to play the DVD (Mac's normal DVD Player doesn't work for some reason when doing this). When I get the frame I want on my screen, I grab it using the Preview application - go to File, Grab, and Selection - and you can use your arrow to highlight the frame you want), and then save it as a jpeg. There's probably an easier way, but this was how I figured it out on my own. It's not hard, per se, once you get the hang of it; it just takes figuring out a lil'.

Thanks, I'm checking out the VLC Media Player right now.

Funnily enough, the reason I've been looking for a screencapture thing was to get stills from ths exact film. Spooky.

What's so haunting is that Mikey is so enthralled by how *pretty* the downed lines are. And he likely never even realized what was happening. Not such a terrible way to go, actually - caught by a moment of unexpected beauty, and zapped out of this world before you even realize it.