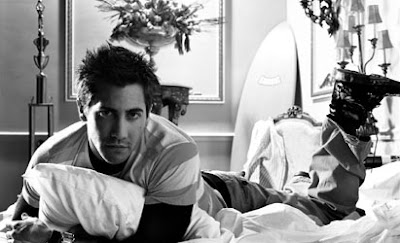 Thanks to Cherita for the heads-up on this story from Variety:

Jake Gyllenhaal will team with helmer Doug Liman for DreamWorks' "Untitled Moon Project."... Actioner revolves around a private expedition to the moon and the race for lunar colonization.... Screenplay was originally penned by Liman and John Hamburg. Author-screenwriter Mark Bowden ("Black Hawk Down") did a complete reconception of the story and will pen the screenplay..."

Jake working with Doug Liman sounds like a terrific idea; as much as I have enjoyed Jake's output as of late, and am looking forward to Rendition and to Jim Sheridan's Brothers with Jake and Tobey and Natalie, he seems to have gotten himself stuck in some sort of prestige-rut, and this "Untitled Moon Project" sounds like the all-important Something Different. Plus, Liman made Go. Go! I love Go. Also, I'm thinking of the muscle Matt Damon put on for The Bourne Identity, and the beefed-up-Jake possibilities...

And from ModFab, comes a different POV on the Farragut North thing (which yesterday was whispered to be dead):

"The hot news that Mike Nichols (Spamalot) was returning to Broadway was important for two reasons. First, because he's coming back to do a blazing-hot revival of The Country Girl, Clifford Odets' backstage drama, starring Morgan Freeman (Million Dollar Baby), Frances McDormand (Fargo) and Peter Gallagher (American Beauty). Pretty powerful cast. But what wasn't announced to the public is that he'll be returning again in late 2008 with another hot show: Farragut North, starring Jake Gyllenhaal. My sources tell me contracts are done, and it's now down merely to scheduling an opening night."

I trust ModFab a thousand times over yesterday's unknown-to-me source, so perhaps there is life in Jake On B'way yet! 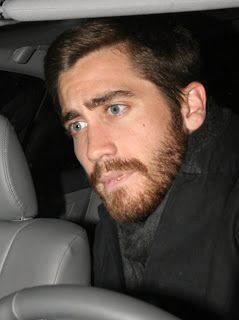 And, as a bonus third bit, here's a conundrum: I've been growing a beard for the past several weeks and suddenly realized this morning, whilst looking at pictures of Jake, that this beard could be construed as me continuing to play the Robert Ford to his Jesse James ("I can't figure out - Do you want to be like me, or do you want to be me?")... perhaps my subconscious has led me down the path of creepy hirsute homages. It was unintentional! Can't a guy grow a beard without it being some insane stalker tribute?

I think my unprompted protestations speak for themselves, really...
.
Who? Jason Adams When? 9:41 AM
Labels: jake gyllenhaal

Your James/Ford association has me in stitches! LOL! I just love you, JA. Doesn't hurt that you started the post with that picture, one of my favorites. Thanks a gazillion for the heads-up on that ModFab bit! Just as I was sitting here thinking there would be no way now for Jake to make it all happen, it sounds like there may be hope. If you trust them, I trust them. ;)

It's one of my fave Jake pics too, and I am fairly certain I'd somehow never posted it before. That whole GQ shoot is just... phenomenal.

ModFab is totally trustworthy, I've met Gabriel aka ModFab in the real world and he's def. someone to listen to.

I think you're totally overselling this ModFab guy...he's really a putz without a shred of authenticity, in my opinion. ;-)

Joking aside, JA, what I'll say is that my source on the Gyllenhaal story is a friend working out of the Mike Nichols office...so it's theoretically possible that they don't know that Jake is considering other options. A movie will always come before a play (ALWAYS), because of the money involved. A star of Jake's size (or Julia's, or Denzel's, etc.) has to turn down work in order to make the play work. And I really don't know if Jake wants to do a play badly enough to make that commitment.

I mean, look at Annette Bening. Three weeks ago, she was coming to Broadway in a new play. Two weeks ago, she got a movie - http://imdb.com/title/tt0473472/

And suddenly, the Broadway gig was canceled. It's all very delicate stuff. This isn't to say I'm doubting my source. More to the point, I'll say I've always doubted that Gyllenhaal wanted to do theatre desperately enough to put his white-hot film career on hold.

Thanks for filling in the details, Gabriel! I'd love to see Jake do Broadway but I too have my doubts that he'll make the requisite time right now for such a commitment. But ya never know!