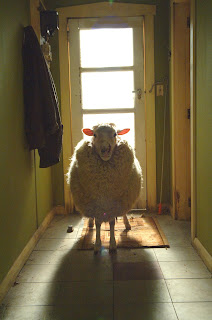 If you liked the movie Slither, then Black Sheep should be right up your alley. I had a positive-but-mixed reaction to both films, and for similar reasons.
Black Sheep opens here in NYC on June 22nd - watch the trailer here or here- and I got a chance to see it last night and, good things first, it was a heap of fun. In the vein of modern B-movie classics like Tremors and Arachnophobia, Black Sheep never takes itself too seriously and throws you right into the action at the get-go. Prodigal-Son Henry comes home to his family's farm in the beautiful hills of New Zealand (on full, gorgeous display here) to sell his brother his portion of the farm and move on from a past that haunts him. Cursed with what turns out to be a fortuitous fear of sheep, little does Henry know that his brother's been messing with the farm's ovine-DNA and, with the simultaneous arrival of a pair of animal-loving peaceniks, all hell surely breaks loose in all manner of gloopy, gory detail.

The special effects are charmingly old-fashioned, done by the fine folks at WETA, who won their Oscars for the Lord of the Rings trilogy but first proved their mettle with Peter Jackson's earlier gore-fests, like Brain Dead (aka Dead Alive) and Bad Taste. There's all manner of puppetry and blood-letting that recall those film's finest moments here, and it's a total hoot. When the ground rumbles and an endless flock of sheep comes crashing over the horizon towards a crowd of international business people the flick really lets loose (not that it'd exactly

been what you'd call restrained before), letting the intestines, literally, rip. There are also hysterical bits with a sheep-fetus Patient Zero and a disturbing (but not disturbing enough; they could've taken it further) redefinition of animal husbandry.

All that said, like Slither I found Black Sheep kind of flat in parts; when the gore and mayhem weren't center stage the stabs at character-based humor and interaction felt... a little off.

Nathan Meister as Henry made for a terrific leading man - equal parts hero and chickenshit, you were never quite sure if he was running to save the day or away to save his ass.

The rest of the actors were similarly down for what director Jonathan King was serving, and everyone was obviously having a blast; but somehow, at only an hour and twenty-seven minutes the film still felt long. The interaction between Meister and leading lady Danielle Mason as hippie-chick Experience felt, sometimes, kind of awkward and stilted; on their own they were fine but when you felt the script nudging them towards inevitable romance it didn't seem to stick.

Likewise a few of the big gags felt as if they came out of nowhere - suddenly the dead rise as were-sheep when you've had no inkling of that before; one less-significant character seems to take minutes to mutate while another's mutation waits hours for the script to insert it into the appropriate scene; Henry handing that rifle back to his brother, which made no sense, a total scream-at-the-screen moment - just little awkward leaps of story and logic that add up to making the film feel sloppier than it needed to.

But if you're looking for a fun night at the movies, you should definitely seek out Black Sheep - with what I imagine was 1/10000th of the budget of a movie like Spider-Man 3 they managed to capture my imagination and tickle my ribs more than the web-slinger did. And Sam Raimi certainly didn't have the balls this go-round to have his hero get mounted by an insane, gore-soaked sheep, now did he?
.
Who? Jason Adams When? 12:27 PM