--- Starbuck as semi-Cylon - there are some stills from the upcoming "Bionic Woman" television reimagineering at The Daily Mail, of which I'm only interested because it's being produced by David Eick, who's also responsible for the phenomenal Battlestar Galactica reboot and it co-stars, as a villainous robo-chick, Katee Sackhoff, aka Starbuck. In the shots at TDM there's only a glimpse of Sackhoff at the bottom, dueling with Michelle Ryan (Eastenders) as our main character, but plenty of shots of Ryan herself in various stages of robo-composition.
--- Somebody page Werner Herzog! The news that Greenpeace is building a replica of Noah's Ark on top of Mt. Ararat in Turkey seems tailor-made for a new doc from him. 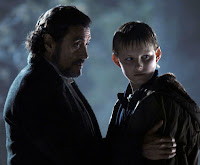 --- Pal-o-mine Sean Collins directed me (again) to more info on The Dark is Rising film adaptation - this time it's an interview with the film's director at SciFi Wire in which he states they've made all sorts of changes to Susan Cooper's original book - Will Stanton's younger and now American, there are bunches of new action scenes and special effects moments added, and it'll be set in a more modern time. Er... okay? Way to just tell us right off the bat that you're doing whatever you want. But I don't much mind a director/screenwriter taking radical changes from the source material - one of my favorites, Kubrick's The Shining, did just that - so I'm not going to throw myself off a cliff or anything here.

--- I'm only linking to the news at AICN that Thomas Jane wrote in to tell them that he's off The Punisher 2 because it allows me to post a picture of Mr. Jane from the original (which I ain't even seen) in super-buff mode, and because he bitches a bunch about having to diet and work out in said letter to AICN, which I found hysterical.

--- Queue-quake - Glenn's passionate post at Stale Popcorn in defense of Francis Ford Coppola's at-the-time derided One From the Heart for the Misunderstood Movie Blog-a-thon at Culture Snob has coerced me to throw the film straight at the top of my Netflix queue; it sounds... fascinating.
.
Who? Jason Adams When? 11:25 AM

You're gonna hate it. Maybe. Hopefully not. The more people on my side the happier I am.