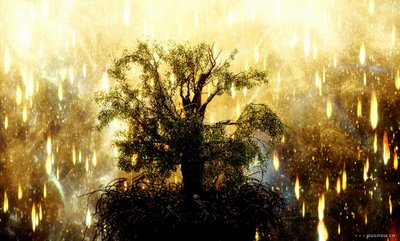 Since seeing The Fountain on Saturday night, I've barely stopped thinking about it. It doesn't help that I've pretty much been listening to Clint Mansell's phenomenal soundtrack non-stop since the day before even seeing the movie - this is how a soundtrack is done right, by the way; utterly gorgeous. But even without the soundtrack reminding me, the film is chock full of images and ideas that lodge themselves firmly into your brain. A deeply personal film, one hazards to guess, for director Darren Aronofsky, the film works in archetypes, and assumes the viewer can fill in the blanks, or not; it depends upon the viewer and what they're willing to bring to the table, and that, my friends, is a refreshing change from the usual paint-by-numbers approach to filmmaking we get far too often.

So yes, we've got the main thrust of the story being about the perfect woman whose loss haunts our hero (after this and The Constant Gardener, I'm really hoping Rachel Weisz plays an unrepentant bitch next), and yes it's a story that's been played out a million times before. Yes, Weisz' character is written in the well-worn shorthand of The Perfect Gal, with big loving doe-eyes and a wicked laugh, who once ran ahead in a sexy dress and who now needs to be rescued.

But the story's not about the story, if you will, it's about wringing out a deep sensation of loss and, finally, of gratitude (how perfect to release it on Thanksgiving!). Gratitude in the sense of figuring out for one's self that those moments, those memories and, even more importantly, what we do with these memories - how we arrange them, how we choose to remember things, how we manipulate them with our imaginations to heighten the feeling of these snippets of time - it's how we arrange the mental landscape of our past that can bring us to a sense of peace, and finality, with the good things of our lives.

Of the three time lines within the film, the future represents, conversely, the memory - it is Tommy (Hugh Jackman) looking back on the things that happened in his long-ago life and working them out. The present-day represents the reality, which in the end is mutable to what the future Tommy shapes it into. And the distant past, the conquistador story, represents the imagination, which is the vehicle through which Tommy and Izzy form their story into an epic romance. Each one effects the other; time is a kaleidoscope in which our stories are ours to find meaning within.

Hugh Jackman gives the performance of his career here; there were moments when I wondered what he must've been thinking of Aronofsky for forcing him to do the things he was being forced to act out, but he went for them with gusto, and finally proved to me that he's not only Wolverine; that he is capable of delivering superb dramatic work. This may be the best male performance I've seen this year; nothing else is springing to mind that beats it, at least.

Oh, and as a bonus, go over here to The Yellow Stereo and download the track from the film's soundtrack called "Death Is The Road To Awe"; it's amazing.

And for my very brief I-just-got-back-from-the-theater reaction, see below or go here.
.
Who? Jason Adams When? 9:30 AM