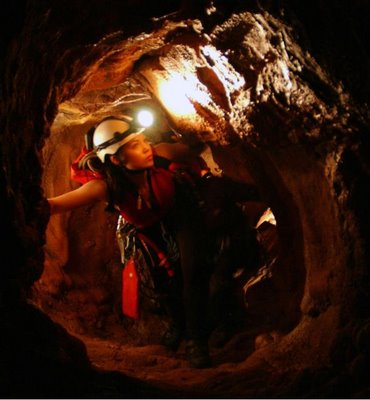 So I caved (I'm really pun-crazy today) and went and saw The Descent yesterday. I'd said I was going to skip the version they were releasing here in the US because they'd apparently changed the ending for here and given it a happier note to end upon, and instead (I'd said) I would find a copy of the original film as it was released in Britain and see it that way.
But then I saw the crazy positive reviews it was getting and found myself overcome with a hysterical sudden desire to see it, as I am always at risk of... plus I was alone all weekend and bored (the boyfriend's gone for a work-trip).
Anyway. It's the best horror film since Wolf Creek. It's not as good as Wolf Creek is (yes, I'm talking about the same Wolf Creek about which Ebert said "If anyone you know says this is the one they want to see, my advice is: Don't know that person no more.", but which I thought was masterfully efficient in realizing an atmospheric terror I hadn't experienced from a film in years - i.e. I couldn't sleep afterwards!), but it's up there.

The Descent's director, Neil Marshall (sidenote: I semi-reviewed his other horror film, Dog Soldiers, here - The Descent is better) shows great chops at establishing an overwhelming sense of claustrophobia and paranoia, and has a great eye for filling the frame at certain moments and cutting off portions of it for others. There's a stifling sense of almost unbearable tension for good portions of the film, where we aren't sure where the horror will come from next; just that it's coming.

It reminded me, at times, of Pitch Black, the Sci-Fi vehicle that unleashed Vin Diesel onto the world, which had a similar tale of fighting off creatures that exist in total darkness and was pretty darn fun. Only The Descent ratcheted up that fear of the darkness ten-fold. It also alludes to films like Alien and Carrie, but in wonderfully unexpected yet apt ways.

Not to mention the whole film can be read in all sorts of manners - if you take it as some sort of "spleunking the caverns of the subconscious" piece, this is a film that could've made Freud's head exlode.

So, my problems with it were two things: first, the fights between the women and the creatures were edited to hell. Way overdone. I don't need to see exactly what's going on in these moments, I do understand the need for a little mystery as to what's happening, fine, but this was just a tad too much. It felt like there was a cut every tenth of a second at these times, and you add the darkness in the whole thing's taking place and it felt a little needlessly vague. I don't need to see every last thing but I'd at least like to have some sort of clue, ya know?

I'm not complaining about the use of darkness, though, which was used incredibly well. There are shots where the only light we have is a flashlight beam cutting across a wide frame of space, slowly revealing a circle of what's in the distance, that will stand your hair on end.

And, yes, my other problem is the ending. The ending which that I'd said I'd boycott the entire US version for, but relented upon. I can see, I can estimate, what the "less hopeful", as I'd heard it called, British ending might've been, and I want that ending. I didn't hate this ending, but it was just okay, and the ending I know exists out there is what I think needed to happen, and would've tipped me over into thinking the film great.

As it is, it is very good, though.

So anyway, like I'd planned to do all along, I need to get my hands on the British version. Ebay here I come!
///
Who? Jason Adams When? 2:09 PM