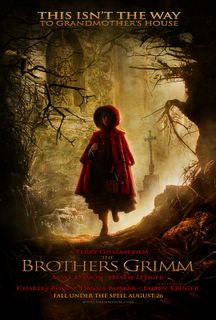 All the stuff I've seen on Terry Gilliam's new film The Brothers Grimm has me getting excited. The above poster, for one, is gorgeous. And the trailer's awesome.

It's hard for a Gilliam fan to stay excited, his projects are notoriously man-handled by inept studio-morons, and this one's been batting around for months, but I-hope-I-hope-I-hope it's survived and Gilliam's genius will be on display... and then they'll realize he's PERFECT for directing the His Dark Materials trilogy and give him Peter Jackson-like sums of cash.

Here's what Gilliam himself has to say about the idea , in an interview with Coming Soon:

CS!: Over the years, there's been a lot of talk about you directing movies based on well-known books like Alan Moore's "Watchmen", Neil Gaiman's "Good Omens" and even the first "Harry Potter" for a while there. Tom Stoppard, who wrote "Brazil," has adapted the fantasy book "His Dark Materials" for the screen, and they seem to need a director. Is that something you might consider doing?

Gilliam: It was actually very funny when I heard about "Dark Materials" being made into a movie. I kept raising my hand at the back of the class saying "Me, sir! Me, sir!" but nobody's seen my hand, I guess. (chuckles) I know my agent was following it very closely. It seems to have gone to various people's hands at the moment. It's a big project and I'm not sure the studio really understands what it is, which may be why it seems to be languishing at the moment.

Hey, New Line, pull yer head out yer arse and jump on this! This is the man who made Brazil for Christ's sake!
Who? Jason Adams When? 11:10 AM