A happy belated 33 (aka the Jesus Year) to Liam Hemsworth! I have been better about keeping tabs on his upcoming movie Land of Bad on Twitter (see here) than I have here on the site (see here), so let's make up for that now. I don't know if he ever wears that mustache seen above in the film (the first promotional image from it has him sans stache) but that video was taken on the set of the movie, so maybe it shows up at some point in the film. Or maybe him and his co-stars Ricky Whittle and Milo Ventimiglia were just doing some role-play in the film's make-up trailer. Whatever the case I dig it. 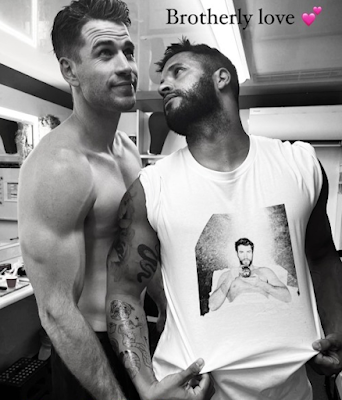 That's not an attractive look.

I agree with Anonymous above. He looks both like he's straining for a bowel movement and like he's computer generated.