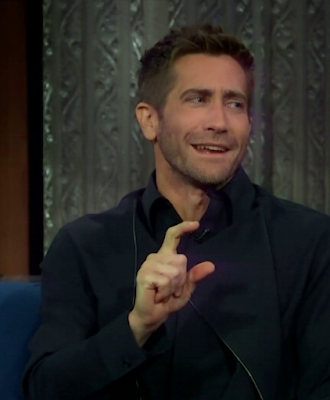 I suppose it was only a matter of time before the hungry hungry content machine got its teeth hooked into Jake Gyllenhaal's hide, and here we are -- Deadline's reported (thx Mac) that he's signed up to star in an Apple series adaptation of Presumed Innocent, Scott Turow's 1987 legal thriller book that was turned into a Harrison Ford movie back in 1990. Because a two hour movie is not enough anymore -- now the same story must be six hour-long episodes! Anyway the people adapting this time are big, as is only fitting to bring our beloved Jack Twist and Donnie Darko down to the small screen --  JJ Abrams and David E. Kelley, specifically. I never read the book and I probably saw the movie back in the 90s on video but I remember nothing about it, so here's how they describe the plot:

"It tells the story of a horrific murder that upends the Chicago Prosecuting Attorneys’ office when one of its own is suspected of the crime... Gyllenhaal will play Rusty Sabich, the fervent prosecutor suspected of killing a close colleague when the evidence begins to point to him... As reimagined by Kelley, who is an attorney by trade, Presumed Innocent the TV series will be exploring obsession, sex, politics, and the power and limits of love, as the accused fights to hold his family and marriage together."

Well sex sounds good, at least. Let's get Jake into some Skinemax shit. Anyway I don't mean to sound skeptical, I look forward to this and hope it's good, and six hour-long episodes of Jake doing anything is fine by me.

The book and movie were pretty good, with a great cast especially Raul Julia making the most of what could have been a stock role. In its own time, well groundbreaking isn't really the word I want, but I can't think of another one. It was when John Grisham was new and the whole police detective/legal drama genre was moving out of the old fashioned Columbo/Perry Mason/Matlock type of stuff for realism and grittier stories where you couldn't spot the killer in the first five minutes.

But now, after 20+ years of that genre? I can't imagine why they are resurrecting this. We've seen a hundred versions of this, and while in its day the ending was shocking, I'm pretty sure in 2023 at least half of the half of the audience that hasn't already seen the Harrison Ford version/read the book will spot the twist and the killer's identity coming a mile away. So why they are choosing to resurrect this, much less stretch it to 6 episodes when the film was just fine at 2 hours...just bizarre.

That said, it's Jake. Of course I'll watch.

Totally agree with ferretrick. This content has been around for 20 years so the spoiler exp date has expired. FYI...he did it.

Sounds like a waste of talent to me. The two hour movie was long enough and like above comments if you saw the movie--well I suppose they'll use it to focus on whoever his wife is more this time. She's not very interesting. Neither is Rusty, frankly. Is Jake taking the Raul Julia role? The book was a page turner though, so maybe there's more to it.