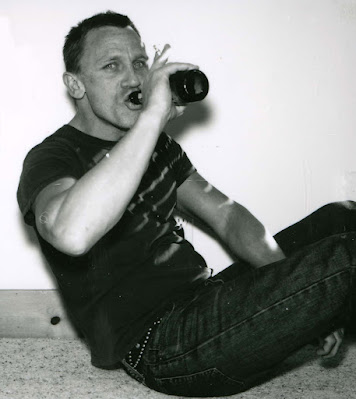 Dammit I hate it when they drop news like this at the end of a day and I have to wait until the next morning to post it -- clearly I should get first dibs on any story that involves the words "Daniel Craig," "Luca Guadagnino," and "Queer." Deadline who? This is MINE. Anyway yes indeed last night those flops at Deadline reported that Daniel Craig is set to star in an adaptation of William Burroughs' 1985 book Queer for the director Luca Guadagnino. Here is Queer's plot if you've never read it:

"The novel begins with the introduction of "Lee," who recounts his life in Mexico City among American expatriate college students and bar owners surviving on part-time jobs and GI Bill benefits. The novel is written in the third person and Burroughs commented in the "Introduction" published in 1985, that it represents him off heroin, whereas in Junkie, his narrator was psychologically "protected" by his addiction. Lee is self-conscious, insecure, and driven to pursue a young man named Allerton, who is based on Adelbert Lewis Marker (1930–1998), a recently discharged American Navy serviceman from Jacksonville, Florida who befriended Burroughs in Mexico City."

I haven't read the book since college so my memories are vague -- I should yank out my ancient copy and re-read it I suppose, although I think Burroughs might be best left to college. Actually you know I wrote that out and then immediately decided it was a foolish thing to say -- the man was in his 70s when he wrote this book so perhaps I should stop assigning him to the "college text" portion of my brain? Anybody read it recently? All of this said Luca has three million projects piled up -- we'll see if he gets to this when that happens.

Who? Jason Adams When? 10:22 AM
Labels: Daniel Craig, Luca Guadagnino

He's ugly but at least he's bisexual, so that's something I guess

Packing my boxes for my upcoming move. I totally forgot that I have this book. More incentive to read it now.