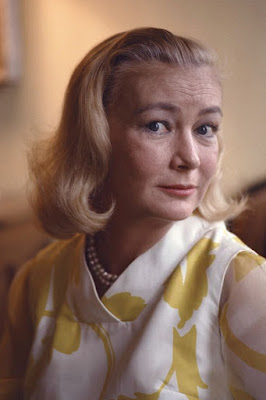 Yesterday marked the 100th anniversary of the birth of the actress Veronica Lake. I can't call myself an expert on Lake -- I realized when I went to look last week that I'd only ever seen one film starring her, the classic Sullivan's Travels. (Mmmm Joel McCrea.) But that's not true any longer as I've now seen two of her films! I have now seen Preston Sturges' 1941 masterpiece on the American class system Sullivan's Travels, and I have now seen Brad F. Ginter's 1970 schlock slab of Hitlersploitation called Flesh Feast, which was Lake's final film. And I have written about it too -- click on over to The Film Experience to read my, uhh, stunned thoughts. But if anyone ever makes a movie about Veronica Lake they should one hundred percent make it about this stage of her life, that much I know for sure now.

Who? Jason Adams When? 10:50 AM
Labels: birthdays, horror

I read your take on the horrendous piece of utter trash that is "Flesh Fest" without question the saddest swan song of any once great star....even more so than Joan Crawford's "Trog" or Miriam Hopkins's "Savage Intruder" and was going to comment but the section was closed over there.

But I'll happily do it here. Having read Veronica's autobiography it seems the awfulness of the flick was in some ways intentional since the makers were trying to make it as exploitive as possible, though I never understood the why of it. Perhaps like seemingly almost everything else in her life Veronica was her own worse enemy where her career was concerned. A very sad way to end a filmography that includes several gems.

I remember that when she died in July 1973 it fell during a huge cluster of celebrity deaths so numerous and significant that articles were written in the papers and commentaries on the news about the sheer number happening so close together. Starting in last week of June with the death of Fay Holden (she had played Ma Hardy in the Andy Hardy films) until mid-July, Veronica, Betty Grable, George Macready, Joe E. Brown, Robert Ryan, Lon Chaney Jr., musician Clarence White, Jack Hawkins, silent screen star Mary Carr, Ernest Truex and Bruce Lee all passed within days (sometimes on the same day) of each other.

Anyway even if her final film is a major pile of swill she was luminous in her heyday and for such a short career she's managed to say in the public consciousness more than many of her contemporaries. I think part of that is due to her distinctive look and an even larger one to being idealized in "L.A. Confidential".

I've managed to see her complete filmography both good and very bad over the years so here's a top 10 of best work:

I Married a Witch-Her absolute peak and best performance.
This Gun for Hire-Paired with her best screen partner-Alan Ladd-in a great cool noir.
So Proudly We Hail-Teamed with Claudette Colbert and Paulette Goddard in a patriotic story of women in war.
Sullivan's Travels
The Blue Dahlia
The Glass Key
I Wanted Wings-her role is supporting but this is the film that took made her a star.
Ramrod
Slattery's Hurricane
Saigon-Her final pairing with Ladd and quite a step down from their previous films.