Karl Glusman's Come To Give Us a Ride 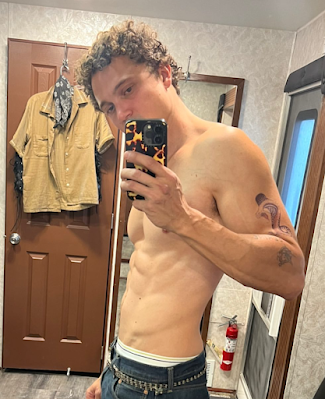 I am about to make several mostly-unfounded conjectures about this shirtless selfie that actor and MNPP fave Karl Glusman posted on his Instagram a few minutes ago, so bear with me. One, and this one doesn't seem like a stretch -- he appears to be in a trailer. You know, like a set trailer, not a double-wide in West Virginia. A film production trailer where actors stay when they are shooting movies. That kind of trailer. That seems pretty clear. So I looked at his IMDb to see what he might be filming right now and IMDb has two projects listed as "Filming" right now under his name -- a movie called Little Death that has him playing a drug addict who breaks into the house of a TV writer played by David Schwimmer. But the full photo seen down below with the inscription about Fight Club makes me think he's filming the other project right now -- a movie called The Bikeriders that's about, you guess it, bike riders. In this case we mean a motorcycle club. Oh and I guess I should mention this is the new movie from Take Shelter director Jeff Nichols, and Karl's co-stars, include (deep breath) Tom Hardy, Michael Shannon, Jodie Comer, Austin Butler, Boyd Holbrook, Norman Reedus, Beau Knapp, Emory Cohen, Toby Wallace, and Mike Faist. That's one hell of a cast! I suppose that is a project I should plan on paying some attention to then. Thanks, Karl's abs! Karl's abs are always doing good work. 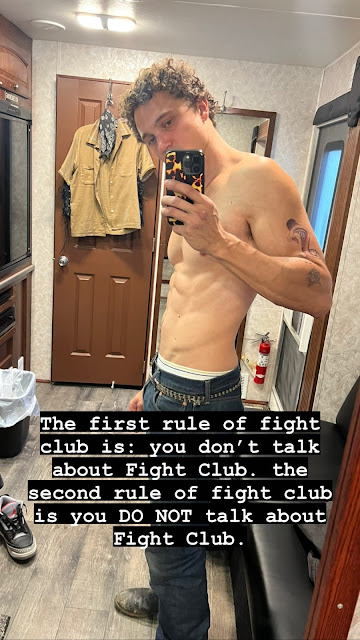