The second actor Leo Woodall scratched his bare butt on last night's latest episode of The White Lotus I knew my "Good Morning, World" post was accounted for! Thank you Leo and thank you (forever and ever) Mike White. I won't get into specifics since some of you might be behind...

... (heh) but if y'all wanna talk the show in the comments go at it! I'll just say I think this season's a ton of fun and I have absolutely no idea what's going to happen in the final two episodes which is as always a delight. I like being surprised! I also like the below photo of Leo snuggling with his co-star Adam DiMarco while Aubrey Plaza makes exactly the same face I would if that was me: 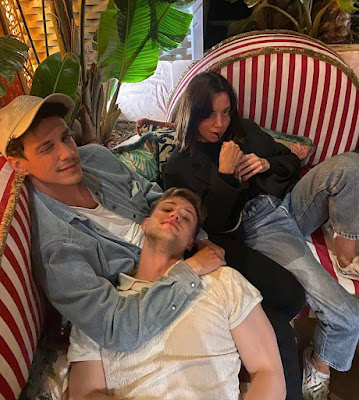 Who? Jason Adams When? 10:23 AM
Labels: Anatomy IN a Scene, gratuitous, Jennifer Coolidge, Mike White

The post show interview with Adam DiMarco (Albie) and Leo Woodall (the nephew) after last week's show was definitely worth seeing. The two actors were totally flirting with each other. It was wonderful.

This has to be the gayest pic... https://www.instagram.com/p/CdnzDOlsimh/

Spicy Season. Let’s spice it up some more with some real frontal. Fuck prosthetics!

Adam DiMarco also shows his butt in that episode! A real feast!