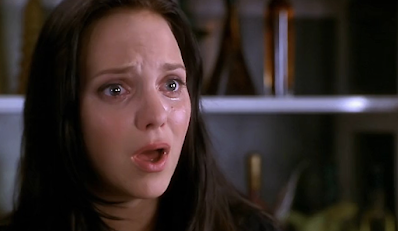 Cindy: Look, if it's about that time
I puked green slime and masturbated
with a crucifix, it was my first keg party, Bobby!

Happy 46 to Anna Faris today! And riddle me this: can you believe that I have never seen a single Scary Movie movie? Not one. I've seen some of the gags from them over the years but I have here a full twenty-two years on never sat down and watched one from start to finish. Not even when I was obsessed with Anna Faris circa The House Bunny era. Maybe over the holidays I should try to binge them? Although I worry these are the sorts of movies that have not aged well. Thoughts? Anyway I am happy that Anna is working in movies again now that she's done raking it in on her sitcom, although I totally missed The Estate...
... when it screened earlier this month and that one co-starred Toni Collette! As Anna Faris' sister! Also Rosemarie DeWitt and Kathleen f'ing turner! For shame on me. I'll see it when it hits digital. Did any of you see it? Anna has another movie lined up too -- she's co-starring in the new movie from John Krokidas, director of Kill Your Darlings, called Tunnels. It's about a teenager (played by It actor Jaeden Martell) whose brother is killed in a school shooting who makes friends with the shooter's grandmother (played by Susan Sarandon, sigh). Besides Faris it also co-stars Patrick Wilson and Alicia Silverstone. I don't think that one's even filmed yet. Get on it already, lazies!

Only watched the first two, but I think the first one is still pretty funny. As to the second - an entertaining Exorcist-themed opening, but you can skip the rest of that one.

Yeah, I love Faris, thought I'd do a Scary Movie binge a few months ago. Made it about ten minutes into the first one. Not for me.
Can't believe I hadn't even heard of The Estate. Took me a minute to recognize Turner.
Faris was supposed to be doing a movie about twins, but I haven't heard anything about that for a while.
Mom was a great sitcom. It should have got one more season. Great cast.

I remember laughing a lot at the first and third ones, but I was a kid. I doubt they have aged well but they were so silly I'm sure they won't be that offensive. By the clips I've seen since, Faris is game in all of them.