What a Wonder Full World 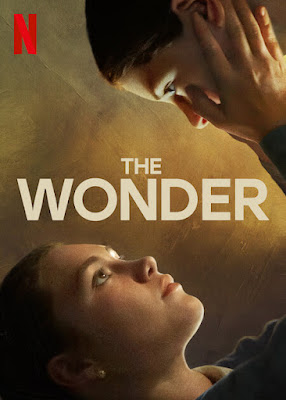 I keep thinking I've seen most of the 2022 movies I've been most excited about already, and then I'm reminded that no, wait, there are actually several more coming still! I might be ahead thanks to press screenings and film-fests but this is shaping up to be quite the year, y'all. Anyway one such film that I'd forgotten we've still got coming is The Wonder, the new movie from Disobedience and A Fantastic Woman and Gloria (times two) director Sebastian Lelio, which stars Florence Pugh. See my previous posts here -- I am a life-long committed Lelio-head at this point so I'm all over this like biscuits on gravy. Or gravy on biscuits? Christ I'm hungry. Speaking of in The Wonder Pugh plays an 19th Century nurse who goes to a small Irish village to find out what's happening with a young girl who's supposedly not eaten anything in four months -- it's based on a well-received book by Emma Donoghue. Anyway out of the two movies Miss Flo's got coming out this fall this is the one I truly give a shit about. And now there's a trailer:

Netflix says they're releasing this in theaters on November 2nd
and then it's hitting streaming on November 16th, so stay tuned!
Who? Jason Adams When? 4:12 PM
Labels: Florence Pugh, Sebastián Lelio, trailers

I read the book, and it was fine but can't wait to watch Miss Flo tear this up!