The Shape of Things Too Dumb 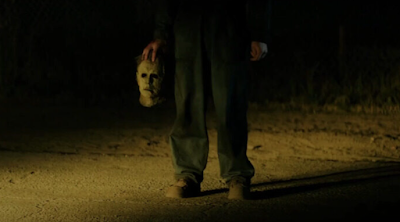 One wonders what the word "Ends" means in the title of David Gordon Green's Halloween Ends. Ends. Ends? E N D S. It's like that thing where you stare at a word for so long that it stops making sense. The lines of the letters reveal themselves to be strange, foreign, gibberish-ish. Suddenly you're staring at a puddle of scribbles, as if the atoms of reality have themselves split open and apart and you're falling into an endless void. A gaping maw -- all of eternity, unfathomable in its expanse, so dark it obliterates past blackness to be something darker than dark, colder than cold.
David Gordon Green's trilogy of Halloween films invite existential despair. But probably not in the way Green intended. I say "probably" because I do not know what is in David Gordon Green's heart. Perhaps he, much like Michael Myers, is emptiness, evil incarnate, and has carefully crafted this series of films in order to drive me personally unto oblivion. Or maybe he is just very very bad at making horror movies. Whatever the case Halloween Ends is indeed, as the title promised, over. And I have survived it.

Or have I? Will I, like Laurie Strode and Jamie Lee Curtis, be dragged back into this nonsense every few years? Will I move off the grid and fill my back-yard with mannequins? When I close my eyes tonight will I find myself sitting down to watch Halloween Ends again, and again, every night, a Groundhog Day nightmare loop from which I will never escape? Such are the questions that a movie like Halloween Ends invites. It invites lots of questions, actually. Questions like, "Were the writers conscious when they wrote this script?" Questions like, "How does one get paid millions of dollars for filling a pail with my own poop and playing with it?" Questions like, "Hrrwhyingahhhhhfuck?"
I suppose I could talk about the plot here at some point, but why bother? No one making this movie cared. Why am I supposed to care? There was a fire sale on dollar bills and everybody ran into the studio and snatched up all the dollar bills they could grab while getting out the back door as quickly as they could. Things like, "This character is one person in one scene and then a completely different person in the next one for no discernible reason whatsoever," didn't seem to be a concern to anyone making it. Things like, "That scene happened in night-time and then the next moment it's day," went unchecked, so too shall go my review. Words! On a page! I! am writing! Them! But why? I! Do not know anymore!
Okay, I'll stop being cutesy and clever. I will get real for this, my final paragraph on a David Gordon Green Halloween Movie ever. Just call this review, "Jason Adams Ends." Here is the fact of the matter. There is not a single scare in this entire movie. I'm not of the mind that horror movies have to be "scary" in the same sense every time -- they can unsettle, unnerve, tap into buried anxieties. There doesn't have to be a jump, or a brutal murder, or a fang-toothed goblin for a movie to be Horror. But whatever Halloween Ends is, it ain't it. That's really all I have to say. It ain't it.

laurie strode 20 years later, in hospice care when her favorite nurse gets killed by michael myers AGAIN. Revenge is cyclical and Laurie is ready to fight once more

Would it make you feel better if I told you that this is an epic takedown of some epic garbage? Just take some aspirin, watch say, Rosemary's Baby, go to bed and wake up to a brand new day. xo

I wrote a review for this earlier today, and reading this, I wonder why I even bothered. Your review was funnier AND summed up my feelings fairly well. Great review!