The Doom Generation Is Nigh 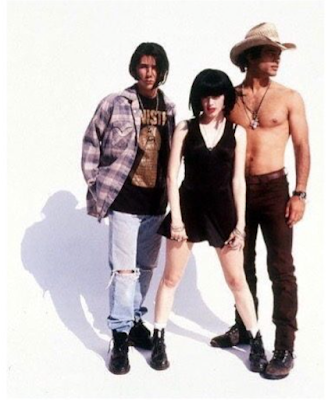 If there's one thing I have screamed onto this here internet so many times I've exhausted even myself over it it's the fact that director Gregg Araki's movies -- which were hugely formative for yours truly, along with other people I suppose but who cares about them -- have been neglected physical-media-wise for decades. Blu-rays either don't exist at all or they have gone long out of print for not just all of his so-called "Teenage Apocalypse Trilogy" -- which includes his 1993 film Totally F***ed Up, his 1995 film The Doom Generation, and his 1997 film Nowhere -- but many others of his films. I've been screaming at Criterion to give a boxed-set for so long I am shocked if they haven't put out a cease-and-desist on my ass.
Anyway there amazing news on that front today! Sundance has just announced that they will be screening a brand new 4K restoration of Araki's original director's cut of The Doom Generation this January! From their press release:

"In 1995, The Doom Generation was unveiled to audiences in Park City before its wider release to the public later that year. While festivalgoers were able to witness director Gregg Araki’s entire vision, subsequent audiences were shown a truncated version. Along with a restoration to 4K by Strand Releasing, the film has been reworked to include the lost moments from almost 30 years ago. When The Doom Generation plays at the upcoming Festival, it will be the version Araki originally intended to make, and will be the first time since 1995 that the uncensored director’s cut is shown in theaters.

“There are three versions of The Doom Generation,” explains Gregg Araki, Director of The Doom Generation. “One is the edited version which was released in theaters and on video. The second is a ridiculous R-rated version made without my approval for Blockbuster Video, which has over 20 minutes chopped out and makes no sense (and I hope disappears forever after this re-release). The third is the version shown at the film’s world premiere at Sundance in 1995, which was subsequently censored per the distributor’s request (primarily in the climactic reel). This new 4K remaster is the first time this Uncensored Director’s Cut has been seen since 1995 (and also restored to 1.85 Widescreen versus the lousy pan-and-scan version which has circulated for decades). Needless to say, I’m thrilled that The Doom Generation can finally be experienced in its full glory in this remastered and restored edition.”"

Obviously ones mind turns to a 4K blu-ray for the film from here, which one imagines must be in the works if they're putting this money into it. Huzzah! I'm pretty excited to see what we've been missing all these many years -- I knew the different cuts existed. It's weird to think how tame  so much of the stuff in TDG is here just 25 years later. Any five-year-old can see far pervier stuff on Netflix with the click of a button. Anyway I'm considering going to Sundance this year in person so not to jinx it, but fingers crossed. We'll see. Tickets and packages and stuff start selling next Monday -- click here to find out more!

This makes my tiny black cinder of a heart happy! Thank you!!! ~R.