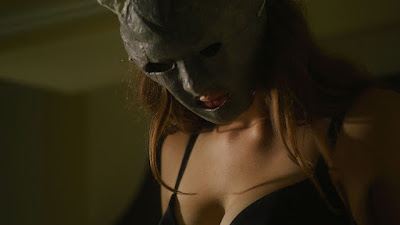 Watching the ways that filmmakers have wrestled with the challenges of creatively making movies during a pandemic has been an endless source of fascination for me, especially when what they have done is used it as an excuse to do a two-person chamber-piece. Because when do we ever get two-people chamber pieces anymore? And yet I've seen more My Dinner With Andres over the past two years then I have every previous year combined. Contrary to what mainstream cinema would have us believe you can do an awful lot with two people sitting in a room talking to one another!

Granted some of these have worked out better than others. But I found actor-turned-director Christopher Denham's latest film Old Flame, which is playing Brooklyn Horror tonight, to be among the best of these recent character pieces that I've seen tackle these limitations head-on. Mainly because it digs into some of the difficult conversations of our moment in time with real knifes-edge skill, and because it does so with a couple of surprisingly effective and believable performances at its center from relative newcomers.

Andy Gershenzon plays Calvin, a total dude-bro if ever there was one, who's left his wife and child behind to travel to his college reunion where he's volunteered to help out with setting up at the hotel and all of that college reunion jazz. The morning of the party, as he's arranging the punchbowl or whatever the hell one does to set up a college reunion, a familiar face appears through the fateful ballroom doors -- it's Rachel (Rebeca Robles), the girl who broke his teenage heart. She's early, they talk, they talk some more, and they keep on talking and they start drinking and then they move the conversation and the drinking up to Calvin's room...

Let's just say there are a lot of twists and a lot of turns in the literal he-said-she-said drama of where their conversations take them and leave it at that -- I think this is a movie that's probably best experienced not knowing where ye be going with it. I will say that, although not nearly as deliciously grotesque as the power-tripping pas de deux on display between Christopher Abbott and Mia Wasikowska in Nicolas Pesce's ace film Piercing (which saw an escort and a serial-killer flip the tables on one another back and forth and back and forth inside a hotel room one night), I nevertheless thought of Piercing several times here -- high compliment coming from me, maybe the world's number one Piercing fan.

The most important factor in a chamber piece of this sort is something you can go into Old Flame unworried about though, because Gershenzon and Robles are quite good. They handle the deft turns of their characters pretty well for such unfamiliar screen presences. Perhaps that unfamiliarity helped? Perhaps I couldn't nail these two down because I had no vantage point from which to stand outside these actors? But there's a thrill of discovery in that, and I bought these two from start to finish even when they were each lying through their teeth. And Denham (with his first film since Preservation in 2014) proves skillful at edging tension out of the ever-more-claustrophobic circumstances -- I'm telling you, two people talking in a room can be the whole world.