We've Come To Ruin Your Dinner 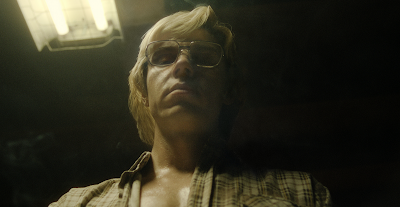 The trailer for Ryan Murphy's limited series Dahmer is here ( I know that technically it's got some long convoluted name also involving the word "Monster" because Ryan Murphy cannot help himself but this show will be called Dahmer from now on -- unless the internet decides it's simply Monster instead -- because I'm not typing out that whole damn thing) -- this show premiere on Netflix in just five days apparently, on the 21st? WTF? They really gotta do better work dumping their content into the world.  Anyway as seen above this series stars the note-perfect casting of Evan Peters (who else) alongside the great Niecy Nash as a concerned neighbor and the great Richard Jenkins as Dahmer's father (has anybody read Dahmer's father's book? It's good and worth it!), and here's the trailer:

What do we think? Guess we'll know in five damn days!
Who? Jason Adams When? 11:23 AM
Labels: Evan Peters, horror, trailers

I'll pass, I remember when all of this happened. It's VERY disturbing and I feel like it does not need a Ryan Murphy treatment. LOVE LOVE LOVE Niecy Nash though.

I'm on it. Unfortunately, his neighbors were very much "After that fact." They still drank and socialized with Dahmer despite the smells and drilling coming from his apartment. He considered the lady Nicey Nash is playing as a friend. It makes you wonder how shitty that neighborhood indeed was.

The whole story continues to be fascinating decades later. I still think Renner was robbed of an Oscar nom.

wait, do they mean miss michael learned from the waltons?