Pearl with the World Cheering 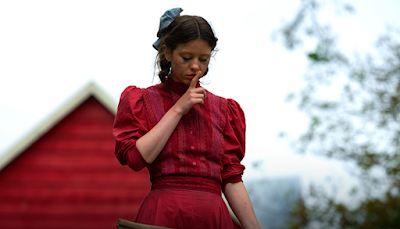 Lord love a Goth fan. We've been trumpeting our love for the actress Mia Goth around these parts for years now, although it's a surprise to look at her IMDb page today and realize just what a brief filmography she's still rocking at this point -- only twelve films to her name and that is including Luca Guadagnino's short fashion film The Staggering Girl which didn't really call on anybody save Julianne Moore to give a "performance" more than it asked them to "look good in outfits." And of course Mia Goth is good at looking good in outfits -- excellent even -- but that's just part of her dramatic appeal, starting and ending with that astonishing Shelley-Duvall-esque face of hers that can swing from hayseed to high fashion with just a tilt of the chin.

Mia had caught my eye right early off the bat with her first turns on film, bursting out of the gate with Lars Von Trier's Nyphomaniac in 2013 (is that movie really about to turn ten?) and then, even more vitally, her co-lead role in Stephan Fingleton's 2015 film The Survivalist -- now there's a movie that's deserving of a reevaluation! I mean I reviewed it at Tribeca that year and loved it so I don't have to reevaluate anything -- I was there and called it correctly! Goth, alongside the great Olwen Fouéré and Martin McCann, all turn in powerhouse turns in a film that actually feels prescient about pandemic times in retrospect. People should talk about The Survivalist more, dammit.

Anyway it was Goth's other turn in a Guadagnino film that finally and fully turned me into an unrelenting fanboy for the actress -- in Luca's glorious Suspiria reimagining, the best film of 2018, Goth somehow almost steals the entire film away from her showier co-stars, which is saying an awful lot when Tilda Swinton has an extra baby-arm attached to her. And speaking of, one does wonder if her jumping on the chance to play an old lady in X was at least partially inspired by the fun she saw Tilda having -- can somebody ask her that, please? I keep waiting to see it brought up in an interview. 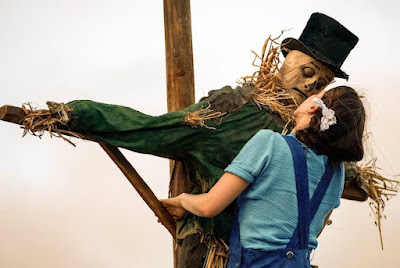 And like so many of us this isolation's gotten to them. Nobody more than Pearl, whose boundless imagination has been left to fester there on the farm, cut off from everyone. She dances for the sheep and cows, convinced she's a magnificent star, and if any of them step out of line -- as one unimpressed goose quick finds out -- it's pitchfork o'clock! When Pearl does sneak into town to watch movies she gets starry-eyed at the slightest hint of razzle-dazzle; deeply convinced she's got that special "It!" that all the It-Girls rock it's hard not to read Pearl as a stand-in for an entire generation of TikTok'ers who believe they're one viral video away from mega-millions, and who then utterly crumble into rage and tears at the first whiff of resistance or rejection.

In that way Pearl is a old-fashioned warning tract about being careful with your dreams -- this movie is very Wizard of Oz y'all, just instead of "Somewhere Over the Rainbow" it's David Corenswet pressing his pants-bulge onto the back of Pearl's dress. Cuz Pearl doesn't want to work hard, she just wants to be rewarded for simple want, believing her want is bigger than anybody else's simply by virtue of it being her own. And everybody who points that out has to go. That said Pearl is proof-positive that Mia Goth's got those goods that Pearl can only stab toward -- Ti West has cottoned on to Goth's greatness, bless him, and given her the demented showcase her talent's long deserved and cried out for. And she kills it, pun intended -- what a turn, what an actress. I could watch ten of these things. 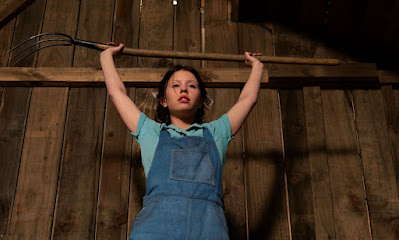 That monologue she gives near the end is brilliant.