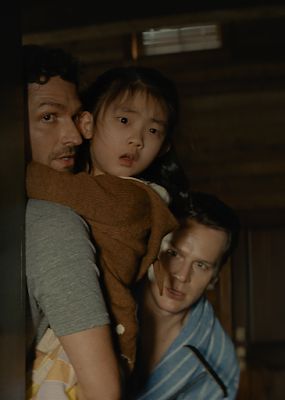 Getting to this late because of a screening this morning but lo behold we have gotten the first trailer for Knock at the Cabin, the new thriller from M. Night Shyamalan. Now you might be saying to yourselves -- "But Jason! You're of the mind that M. Night hasn't been at the top of his game for a very long time! Why dost thou care?" And first off I don't know why you suddenly went all Shakespearean there at the end but I like it; you should keep that cool shit up. Secondly -- I actually mostly liked Night's last film Old. Until he went as he's wont to do and crawled up his own ass with his complications having complications, anyway. But Old was goofy fun! Most importantly though, Knock at the Cabin stars Jonathan Groff and Fleabag out-gay Ben Aldridge as a pair of Daddys, so obviously I'm gonna talk about this movie. Come on. What am I doing here if not exactly that? They play dads to a little girl who all go to a cabin in the woods when, wham, a group of nogoodniks (including Dave Bautista and Rupert Grint) comes a'knockin. But don't let me describe it poorly, just watch the damn trailer:

Knock at the Cabin is out on February 3rd. What do we think?
Who? Jason Adams When? 1:29 PM
Labels: Ben Aldridge, Dave Bautista, horror, Jonathan Groff, M Night Shyamalan, trailers

How crazy is this? For the first time since unbreakable, I'm intrigued.

I read Paul Tremblay's book a few weeks ago.....if the movie is anything near as creepy and disturbing, it's going to be great!