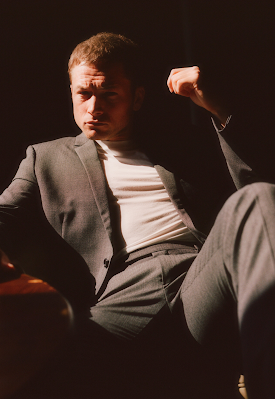 While you might think it's the Taron Egerton angle of this news that's got me posting this news but, beside getting to use the above photo for it of course, what actually pushed me over the edge was the director -- Orphan and The Shallows director Jaume Collet-Serra is going to direct a movie called Carry On that will star Taron as a TSA agent who gets blackmailed by a mysterious passenger (Jason Bateman) to allow a suspicious package onto a crowded Christmas Day flight. If your brain is hitting all the Die Hard 2 alarms -- Christmas-time and an airplane thriller! -- then I say welcome because that's where I'm at as well.
Collet-Serra loves thrillers about commuters, having already directed the Liam Neeson thrillers Non-Stop and yes, The Commuter. And I suppose you could say Jungle Cruise counts too! Anyway the man directed Orphan and The Shallows -- not to mention all of those movies I just mentioned being way better than they have any right to be -- so he's got a lifetime pass. And I love that he gets to keep making these mid-level old-school thrillers too. The cinema is better for it!
Who? Jason Adams When? 12:02 PM
Labels: gratuitous, Taron Egerton