I finally watched Mark Rappaport's weird little documentary Rock Hudson's Home Movies from 1992 this past weekend -- our pal Glenn Dunks had recommended it at The Film Experience some ages ago... and now that I have looked it up I see that my brain has turned "March of this year" into "some ages ago" lol -- well, you know how time has been lately! Anyway the doc has Rappaport (gutsily, I might add) narrating the doc on-screen as if he is Rock Hudson himself, speaking from the afterlife I guess? And it's mostly an assemblage of clips of Rock being real gay on-screen, talking about how mainstream America was clueless even though all the information was right there if they'd known what they were looking at. Anyway the doc is interesting as a time-capsule for how we talked about these kinds of things in 1992, and as an collection of clips of Rock being hot -- like the above moment from the 1962 adventure-drama The Spiral Road. Anybody seen it? I meant Rock Hudson's Home Movies but I guess I mean The Spiral Road as well. He does look like this for the majority of it: 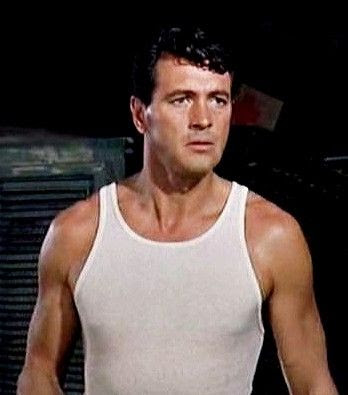 Who? Jason Adams When? 9:57 AM
Labels: Anatomy IN a Scene, gratuitous, Rock Hudson

Just commenting thanks for the Gods and Monsters banner! I've been thinking about it all weekend with Brendan Fraser in the news. I can't think of a better performance by him.

I have seen both Rock Hudson's Home Movies and The Spiral Road.

RHHM was as you said a kind of weird time capsule and odd conceit but looking at the Rocket man looking all tasty for a little over an hour made it an easy go.

I wanted to love The Spiral Road because of the cast which besides Rock includes Burl Ives, my beloved Neva Patterson and freaking Gena Rowlands! but it was mediocre. Still the cast made it worth seeing.....once.

I saw it ages ago and remember loving it.. also, a couple of months ago I saw Rapaport's "The silver screen: color me lavender" (I think it's on Youtube?) and it's also a treasure trove of gayness from old Hollywood movies.