Have We Got a Treat For You 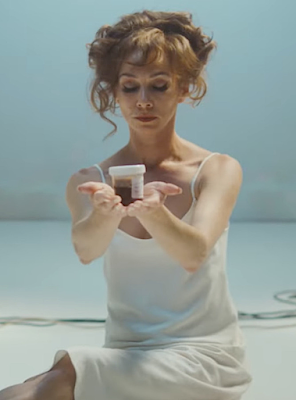 Very important news broke on the world widest of webs yesterday -- Peter Strickland's marvelous 2022 film Flux Gourmet will be getting a blu-ray! One never knows these days when it comes to physical media -- some movies fall through the cracks and are never heard from again. Although I do think Strickland's cult-y enough at this point that we don't need to worry about that happening to any of his. Anyway the disc hits on October 18th and you can pre-order it right here. The price on the disc has already dropped by several dollars since I shared that link on Twitter last night so I wouldn't be surprised to see it fall even further come October.

Immediately one of the greatest things I own & my birthday present to myself this year — an apparently rare vinyl boxed-set of director Peter Strickland’s really-for-real SONIC CATERING BAND music (as fictionalized in his most recent and amazing film FLUX GOURMET) pic.twitter.com/0J8VJW5TJp

Flux is one of my favorite movies of the year so far and I have already written about it twice -- here is my review for Pajiba, and then over at Mashable you can read some further words from me on the movie's implosion of flatulence humor, because yes, that's a thing I wrote about. Don't you poo poo me!

Who? Jason Adams When? 11:34 AM
Labels: Peter Strickland