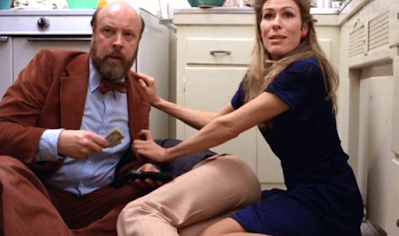 Paul: Mary, I just killed a man.
Mary: He was a man.
Now he's just a bag of garbage.

How oh how had I never seen Eating Raoul before yesterday? I don't recall what the match was that struck last week that reminded me of this gap in my education but the fine folks at Criterion Channel made it an easy fix since it's streaming on there. And instantly it's a fave, as it so clearly was going to be and was meant to be all of these many years. (It just celebrated its 40th anniversary in May.) Any fans of Paul Bartel's 1982 killer swinger satire up in here? I think there must be, if for the Edie McClurg cameo alone...

Edie McClurg’s cameo in EATING RAOUL (#NowWatching on @criterionchannl) is the stuff of legend pic.twitter.com/VcpsGAaMsf

Really? Even I've seen Eating Raoul. Haven't watched it in years -- I need to go back to it.

I saw it again recently- I was lucky to have a slightly older friend in college who took me to see offbeat films like this- and it still holds up wickedly.
There was an off-Broadway musical version in the 90s that featured Adrian Zmed as Raoul... that's all I remember about it.

I was at the premiere in Minneapolis and met Mary Woronov, who was very nice. I still have a pin from it that I made into a refrigerator magnet!

Another movie I cannot believe my mother took me to see... When I was 15.