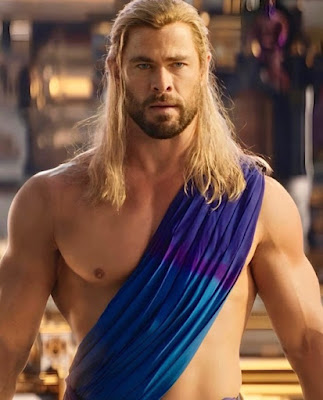 So whomst amongst you caught Thor Love and Thunder over the weekend? I saw a press screening before the holiday weekend and was inspired to say basically nothing about it when the time came -- I think my pal Kristy summed it all up pretty well in her review at Mashable, and the one by TK at Pajiba as well. It's got its charms but those charms are kind of smothered by an aimlessness and an absence of stakes. Bale was great but the writing really let him down, and it felt much more indifferently filmed than Ragnarok did to me.

Well here is the best advertisement that exists for #ThorLoveAndThunder pic.twitter.com/gWKo47S0T6

I have no intentions of piling on Taika (which seems to be having a moment) but I will admit that between this and that pirate show of his, which I could barely finish an episode of, we might be slightly on the outs. Fingers crossed his long long long delayed soccer movie with Michael Fassbender rights the ship! I'd love to hear y'all's opinions on Thor though. Also answer me this if you can:

Now that #Thor is out can somebody tell me (this is maybe a spoiler but it's more of a question) - who is it we see giving Gorr the sword? I feel like I missed something - there's a flash of some figure telling him what to do in that moment, isn't there? Is this a future Big Bad? pic.twitter.com/NO75OcNUdE

Beautiful butt on a beautiful man. Best scene of the film.

Besides Bale and Portman of course.

The scene was funny, sexy and heartfelt with the R.I.P. Loki tattoo.

Thor saying, “You flicked too hard, dammit!” Is similar to Ice Age 3 when Buck said, “I don’t know. I don’t speak wind.”

I've not seen the new Thor, but regarding Our Flag Means Death, I'd suggest you give it a few more episodes. It is a very clever show, and has a very unique gimmick: [at least new to me] where different characters essentially belong to different genres of cinema (with different consequences to their actions based on their character). Took a bit to get used to, but very charming after a while.

Managed to be both smart and enjoyable at once.

Enh...these movies are kinda critic-proof. It probably does suck BUT I'll probably love it cause I like dumb comic book shit.

Still not over this scene. I want more of this from the MCU. Maybe that will make them better.

I was only so-so on OFMD until the 4th episode which was pretty great. It's just too uneven overall and not nearly worth the raves. I'm hoping the rest of the season gets better though.