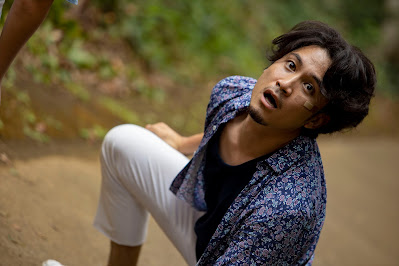 Hard to believe but it's been a full five years since Japanese director Shin'ichirô Ueda gifted the world with his delightful lo-fi meta zombie comedy One Cut of the Dead -- I guess it did play film festivals for a couple of years, building big buzz for itself; I have a distinct sour memory of myself growing more and more annoyed that I hadn't been able to see it as I saw other people's praise pop up all hither and tither. The bastards! But once I did catch the fever, the fever stuck -- what a delightful trickstery film it turned out to be, a gory spectacle that was also somehow ridiculously sweet in its final act, a testament to low-budget creativity and spunk.

Ueda has done several other projects in the fine years since -- and One Cut of the Dead has also gotten itself remade in France as Coupez! (aka Final Cut) by The Artist filmmaker Michel Hazanavicius (a movie which is coincidentally also screening at Fantasia this year) -- but his movie Popran is the first thing of Ueda's I've managed to see since One Cut and holy hell did it work just as well for me! Vibing on the same goofy sentimental vibe slathered over a subject that would seem to invite anything but, Popran is a demented pop delight, a sincere lark about modern masculinity and the tools (ahem) we can use to deconstruct it.

Popran stars Yôji Minagawa as Tagami, a full-of-himself app designer who's become a big deal by stepping on and forgetting all of the people who helped him get where he is today. Well where he was yesterday, anyway -- one morning after a one-night-stand Tagami wakes up and, not to put too fine a point on it, finds that his dick has gone missing. But not in a bloody spectacle of Lorena-Bobbit-esque sacrifice -- the place where his dick used to be is now smooth as a Ken Doll, except for a small solitary hole where pee won't stop spilling from.

And so begins Tagami's quest to reunite himself with his dismembered member, which he finds, through a series of bizarre encounters I wouldn't dare spoil, has grown a will of its own and simply flown the fuck away. Ueda peppers this magical scenario with rules and logic that all makes their own nutty sense in context, and a lot of the fun of the movie is seeing this world get built from the, uhh, balls up. It's all surprisingly light and frothy for a subject that will have most men cringing and crossing their legs -- a castration comedy for the ages!

Where the plot goes once you see where it's going isn't super surprising... except for, you know, the fact that this movie's about what it's about at all -- once you remember that, "Oh right this dude is trying to catch his penis with a butterfly net," it's suddenly kinda amazing that it all feels so natural. True facts, the fact that Ueda manages to make this nonsense all seem so logical, well, that just may be a sign of legitimate greatness. And it also seemed to me the most natural thing in the world that Popran might get its own American remake one day -- I can 100% picture Oscar Isaac chasing his wildin' willy around in a heartbeat. Make it happen, Hollywood! 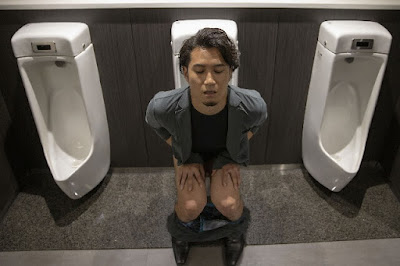