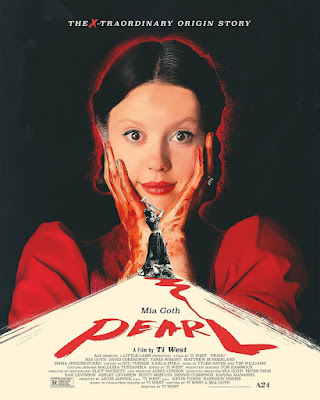 If you're anything like me (and apologies if so) then you've been waiting for word on the surprise prequel to Ti West's X that was announced during that film's closing credits -- called Pearl it will take us back to the character played in the film by Mia Goth under a ton of make-up (that is technically a spoiler but I don't care about spoiling a movie that's been out so long, it's on you at this point). Anyway A24 is finally giving us some news -- there's the poster above which they just dropped on Insta, and news that a trailer's arriving tomorrow. No word on a release date for the movie but as I've stated before my guess is Halloween-time. So come back tomorrow and I'll share the trailer! Read my review of X right here if you missed it the first time. Now I wanna watch X again!
Who? Jason Adams When? 12:15 PM
Labels: horror, Ti West