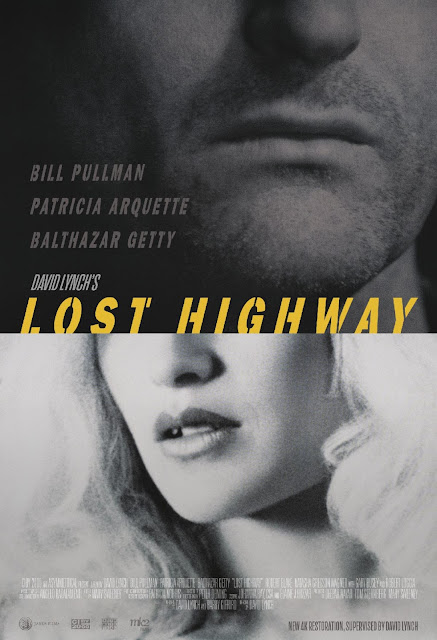 How long has it been since you've seen David Lynch's film Lost Highway? Perhaps never? It's been a long time for me -- it's got one of my favorite soundtracks (which was just released on vinyl by the way, check that out here if you're a fan) but the movie itself has never been one of my favorite Lynchs. This is obviously relative -- a less fave Lynch is still far more interesting than anybody else's movie --  but I'll admit I don't revisit Lost Highway very often.

There are several reasons, a big one being something I've admitted before -- I'm just not a fan of Patricia Arquette? Some actors you just don't connect with and she's always been one for me. Anyway -- so then why is Lost Highway (including Patricia!) this week's banner image, and why am I talking about it now? Because I am nothing if not easily enticed and 1) I watched a documentary about David Lynch yesterday that is about to premiere at the Tribeca Film Festival -- it's called Lynch/Oz and it dives into the director's relationship with The Wizard of Oz, and Lost Highway came up several times, and I was like, "Oh right, Lost Highway I should re-watch Lost Highway." And 2) because Lost Highway is getting a 4K re-release this summer (hitting the FLC here in NYC on June 24th) and they've just dropped a trailer for the remaster. Watch here:
Who? Jason Adams When? 11:56 AM
Labels: David Lynch, trailers, Tribeca

Here's the thing about Patricia Arquette-she's amazing.
That's all.
I will see this again.

I thought you meant Film at Lincoln Center, but it's not on their calender, so what is FLC?

I did meant Film at Lincoln Center -- here is a link: https://www.filmlinc.org/films/lost-highway/ -- I guess they just haven't scheduled that week's times or started selling tickets yet! Just keep checking