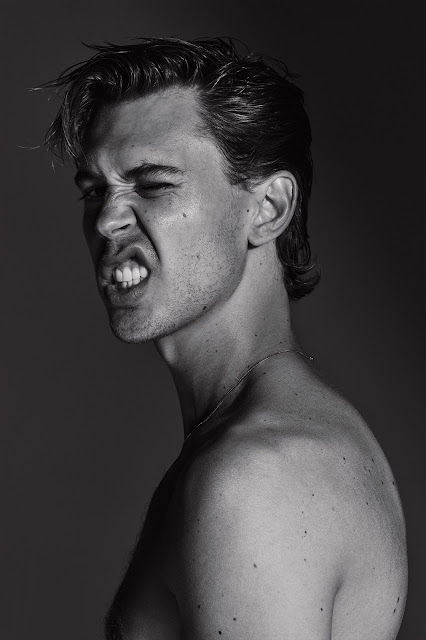 I reserve my right to change my opinion on this after I see Baz Luhrmann's Elvis movie -- because he does look hella charismatic, not to mention far more Elvis-y than I would have imagined beforehand, in the trailer for the film -- but for right now I have to admit that I don't really "get" Austin Butler. Not that I have had all that many opportunities -- the only things I've seen him in are Once Upon a Time in Hollywood, which he was fun enough in but his role as Tex was hardly enormous, and apparently in Jim Jarmusch's zom-com The Dead Don't Die, which I have no recollection of him in at all. (I did like that movie way more than most people did though.) Anyway that's not really my point -- what I am saying is I am not as of this moment attracted to him. So this new cover photoshoot for GQ here showing up this morning? Ehh. I will share these two photos but y'all can click over for the entire thing and there's lots more photos. But we'll see what happens with Elvis. It wouldn't be the first time that the allure of pure talent got the best of me where my pure loins had let me down. And I hope it does, given that Dune news... 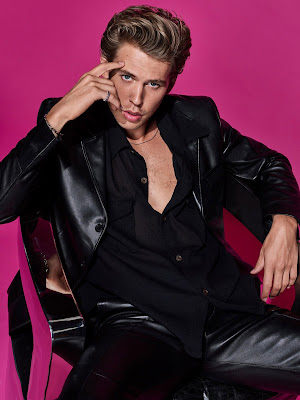 The thought of him having a knife fight with Timmy in IMAX is enough to make me like him.

He was also the lead in the silly but fun "Chronicles of Shannara" tv show, which also had the gorgeous Manu Bennett and the perpetually youthful Daniel MacPherson.

I don't know about this one. After his dreadful version of The Great Gatsby, which destroyed that beautiful novel with pointless and stupid moments, I'm wary of Baz Luhrmann's work. I may have to wait until it's on disc or streaming to see it. Still this guy does resemble Elvis, and Tom Hanks is a terrific actor.

He was great in OUATIH, but it was easy to standout b/c most of his scenes were with a bunch of interchangeable women (didn't even recognize Lena Dunham) with the exception of Dakota Fanning, wha was fantastic. I had no interest in this Elvis movie, but then I saw the trailer, and it jumped to the top of my list. Looks great, and definitely something to see, probably in IMAX, or that Dolby theatre

He was excellent in the Denzel Washington revival of The Iceman Cometh. Much more talented than you might guess from some of his work in movies.

I thought he was surprisingly good (considering the role) in Shannara, especially in the lighter moments. The New Yorker review of The Iceman Cometh (quoted in and linked from his Wikipedia page) absolutely RAVED about him.

Why on earth would you put a handsome man in tight leather pants and then let his shirt cover up his bulge like that? Why does no one consult me about these things?