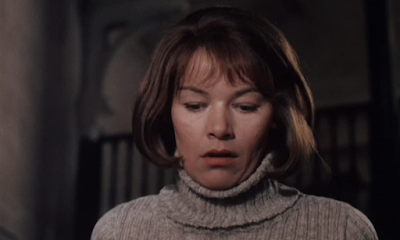 Alex: I've had this business:
"Anything is better than nothing."
There are times when nothing
has to be better than anything.

A happy 86th birthday to two-time Oscar winner, former MP of the British government, and living goddamned legend Glenda Jackson today! I only just saw John Schlesinger's Sunday Bloody Sunday last year for the first time when they had it on Criterion Channel and man oh man is that is a movie. A relationship drama that plays like an existential horror film -- and I love it when those two specific genres are blurred, don't you? -- the film is still remembered for its taboo-shattering gay kiss between Peter Finch and Murray Head...
... but then that's typical of Glenda's career -- however fancy you think you've been, Glenda got there first. Very happy I got to see her on stage twice in Three Tall Women and then a third time in King Lear over the past few years (pre-pandemic that is) because who knows if that will ever happen again -- she was exactly as electric as you've heard. A happy birthday to this singular one! 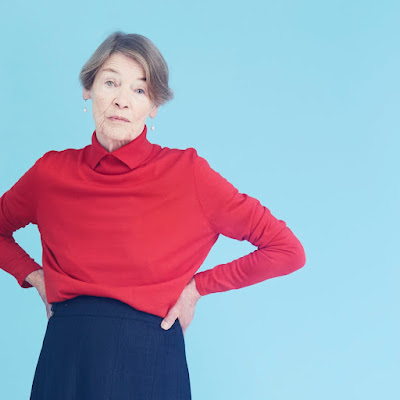 Who? Jason Adams When? 11:55 AM
Labels: birthdays, Life Lessons

I saw this for the first time in the last 1-2 years, it was pretty racy for it's day. I read another actor was cast as the older man but was nervous about kissing a man on screen, apparently his career never recovered.

I wish she'd get one last great film role,she may have brought some of her signature frost in Judu D's Belfast part.

LOVE this woman and have since her 70's heyday. I admired her for following her heart and leaving acting behind to try and make a difference in the world but was jubilant when she returned to the acting world. Such a pity that right in the center of her celebrated return the pandemic threw the breaks on it. According to her IMBD page she has a new project in pre-production so fingers crossed.

Yes she has never been afraid to venture into avante-garde territory bless her. Right from almost the beginning of her career with Marat/Sade her choices have been eclectic. As marvelous as that is she also rocks more traditional fare and there will never be anyone who captures Queen Elizabeth I like she did in the BBC miniseries Elizabeth R.

You didn't ask for it but here are my top 10 favorite performances of hers:

1. Return of the Soldier-A great unsung drama with astonishingly great performances from not only Glenda in a change of pace role but Julie Christie, Alan Bates and an unrecognizable Ann-Margret. See it if you haven't!!

2. Elizabeth R
3. Stevie
4. The House of Bernarda Alba
5. Sunday, Bloody Sunday
6. A Touch of Class-I know the picture is derided, has aged terribly and there were other worthier performances (Ellen Burstyn in The Exorcist should have taken it in a walk) that year but her work in the film remains lovely.
7. Mary, Queen of Scots
8. The Maids
9. The Devil is a Woman
10. Business as Usual

A Glenda Jackson Top 10 without Women in Love? For shame.

She's solid in Women in Love but that picture for me is all about Alan Bates and Oliver Reed. I'd rate her delightful cameo in The Boyfriend and her work in Marat/Sade before Women in Love as well.

She should have her damehood twice over. Once for service to theater and once for political service (even though I wouldn't vote for her party. LOL). She probably doesn't like the Honours system.

I saw this movie last week. I enjoyed it. The movie was ahead of its time in 1971.

You are right about that Wyatt, not many men back then would kiss another man on the lips, on camera.