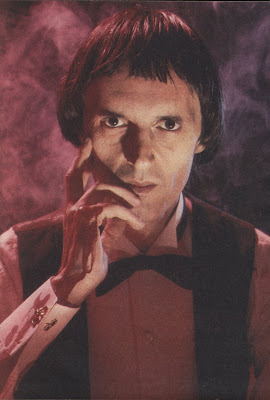 Enormous news for New York horror movie fans -- and horror fans anywhere who can get to NYC next month (and I suppose non-horror fans, there are things here for you too, but why can't you just be better) -- as Film at Lincoln Center has just announced a gigantic Dario Argento retrospective called "Beware of Dario Argento" running June 17th through 29th that will screen twenty of the Italian maestro's movies, including SEVENTEEN 4K restoration premieres (!!!), fifteen of those being World Premieres, including  masterpieces like Deep Red, Tenebrae, Opera, The Bird With the Crystal Plumage. And Dario's new film Dark Glasses is having its US premiere!

Oh and Argento will also be here in person for several Q&As and introductions alongside the films. This series more than any other yet is really testing my will as far as not going to public screenings still because of, you know, the ongoing pandemic or whatever. You can check out the whole line-up and write-up over on their site, although I will share the press release with you below -- tickets go on sale for Members of FLC today at Noon and for non-members tomorrow. Hit the jump for the full press release...

New York, NY (May 31, 2022) – Film at Lincoln Center and Cinecittà announce Beware of Dario Argento: A 20-Film Retrospective, from June 17-29. After three decades of collaboration, the two institutions join forces once again, to co-present the twenty-film retrospective of the iconic Italian horror director’s influential feature films, 17 of them premiering in brand-new 4K restorations prepared expressly for this occasion by Cinecittà, with the director in person for select screenings.

“We are delighted to celebrate the 30th anniversary of our ongoing partnership with FLC, by offering its audience the world premiere of 17 restorations of Dario Argento’s magnificent works, prepared by our laboratory at Cinecittà. Following the record-breaking 2018 Luchino Visconti and 2019 Ermanno Olmi retrospectives, we have decided to come back after these difficult months with Dario Argento, whose retrospective has already been booked by international venues for the next two years,” said Chiara Sbarigia, President of Cinecittà.

"It is always a pleasure to collaborate with Cinecittà, partner on some of our most popular retrospectives of all time, and this time in honor of a living legend,” said Dennis Lim, Director of Programming, FLC and Artistic Director, New York Film Festival. “To be able to present these striking new restorations to New York audiences with Dario Argento in person is a thrill and an honor."

Ever since his heart-stopping directorial debut in 1970, Dario Argento has been redrawing the boundaries of cinematic horror with flamboyant violence, feverish plotting, and deliriously stylized compositions. Initially associated with giallo, the pulpy Italian subgenre he helped formalize and would later take to unprecedented heights with his international breakthrough, Deep Red (1975), Argento embraces a gamut of fantastical influences—from sublime Gothic art and penny dreadfuls to Murnau, Hitchcock, and Disney—with his distinctively baroque style of disorientating cinematography, stained-glass colorwork, and elaborate musical scores (often composed by his own rotating house group, Goblin).

The retrospective will pay homage to Argento’s singular voice in horror cinema, from his seminal debut feature The Bird with the Crystal Plumage, widely regarded with popularizing giallo internationally, and other unforgettable contributions to the subgenre including: Deep Red, Tenebrae, and Opera; to his masterful paranormal-tinged Phenomena, and supernatural “Three Mothers Trilogy”: the wildly influential Suspiria, 35mm screenings of Inferno, and Mother of Tears; to underscreened gems like Trauma, The Stendhal Syndrome, The Black Cat, and Dracula 3D, as well as his made-for-television feature Do You Like Hitchcock?. The lineup also will host the North American Premiere of Dark Glasses, his first film in 10 years, distributed by Shudder.

Organized by Madeline Whittle and Tyler Wilson of Film at Lincoln Center, and by Camilla Cormanni, Paola Ruggiero, and Marco Cicala of Cinecittà. Co-produced by Cinecittà, Rome. Presented in collaboration with the Italian Cultural Institute.

Beware of Dario Argento: A 20-Film Retrospective is sponsored by MUBI, a curated streaming service for award winning cinema.

Please note: Masks are required for all staff, audiences, and filmmakers at all times in public spaces. Proof of full vaccination is not required for FLC audiences, but is strongly recommended. Visit filmlinc.org/safety for more information.

Tickets for the retrospective go on sale Wednesday, June 1 at noon with a FLC Member pre-sale beginning on Tuesday, May 31 at noon and are $15; $12 for students, seniors (62+), and persons with disabilities; and $10 for FLC Members. Become a member today! See more and save with a 3+ Film Package or All-Access Passes ($99 for General Public and $49 for Students). Learn more at www.filmlinc.org/argento.

Film at Lincoln Center is dedicated to supporting the art and elevating the craft of cinema and enriching film culture.

Film at Lincoln Center fulfills its mission through the programming of festivals, series, retrospectives, and new releases; the publication of Film Comment; and the presentation of podcasts, talks, special events, and artist initiatives. Since its founding in 1969, this nonprofit organization has brought the celebration of American and international film to the world-renowned Lincoln Center arts complex, making the discussion and appreciation of cinema accessible to a broad audience and ensuring that it remains an essential art form for years to come.

Film at Lincoln Center receives generous, year-round support from the National Endowment for the Arts and the New York State Council on the Arts with the support of the Office of the Governor and the New York State Legislature. American Airlines is the Official Airline of Film at Lincoln Center. For more information, visit www.filmlinc.org and follow @filmlinc on Twitter and Instagram.

Cinecittà is the state-owned company whose main shareholder is the Italian Ministry of Culture. It holds one of the most important European film and photographic archives, Istituto Luce, inscribed by UNESCO in the registry “Memory of the World”.

Cinecittà’s institutional work includes the promotion of Italian cinema, through projects presented in collaboration with the most relevant cultural institutions of the world: the Academy of Motion Pictures, Arts and Sciences, UCLA, University of Berkeley, MoMA, British Film Institute, Institut Français, Cinémathèque Française and many others. Cinecittà cooperates with major film festivals such as Cannes, Berlin, Toronto, Shanghai, Tokyo, Locarno, New York, London, Haifa and many others, by organizing national selections, guaranteeing the presence of Italian films and artists, and providing multifunctional spaces to help the promotion of our cinematography. It is also involved with the direct organization of numerous Film Festivals around the world: The Italian Film Festival in Tokyo, Cinema Italian Style in Los Angeles, Open Roads – New Italian Cinema in New York, The Festival of Italian Cinema of Barcelona, London and many others.

The company also owns a film library with around 3000 titles subtitled in foreign languages for the promotion of Italian culture at major Institutes around the world, also in collaboration with the Italian Ministry of Foreign Affairs. Restorations and new prints are added every year.

Since July 2017, Cinecittà has been also managing the legendary Cinecittà Studios (founded in 1937), where Federico Fellini’s films have been filmed. Cinecittà Studios are the perfect location for high profile productions, like House of Gucci by Ridley Scott starring Lady Gaga.