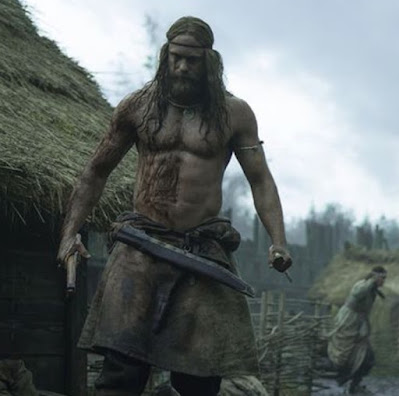 The time has at last arrived! Raise your broad-swords up and smack 'em against your broad-chests, one two times -- here is my review of Robert Eggers' The Northman over at Pajiba! Summed up, it's a rave -- I'm glad I went back and saw it a second time at a second press screening when I was feeling better because I wasn't sure how much of a rave until then. As I say in the review there are some qualifications, and I would definitely at this point rank it as my third favorite Robert Eggers movie after The Lighthouse and The Witch. But it's a treat, an absolute treat, all the same. Go read! And go watch the damn movie!
Who? Jason Adams When? 3:24 PM
Labels: Alexander Skarsgård, Claes Bang, Nicole Kidman, reviews, Robert Eggers

Saw it last night. Your review is on target.

Seeing it Monday, only b/c I had to see Nic Cage's film on Friday-and can I just say-
How adorable is Pedro Pascal as a super fan in it? He's like a puppy.