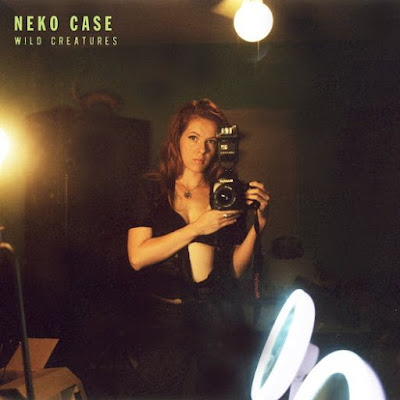 Well here is a happy thing to combat the... everything... MNPP fave Neko Case is putting out an album on Friday! Granted it's a "career-spanning retrospective album" (which I guess is how you say "Greatest Hits" now) so it will presumably be mainly old music, but she does promise one new song called "Oh, Shadowless" and that it will also feature a bunch of essays and commentaries from frequent collaborators -- one assumes some of this will be alongside a vinyl edition that hasn't been revealed yet. All we have now is the news, and some new tour dates, including one here in NYC in Brooklyn in September. And now I have to decide if I think I will be mentally there, able to go to a concert come September. What do y'all think? Are you going to concerts yet? I would love to see my Neko again. Anyway stay tuned for more info on this when we have it on Friday. I love Neko so much!
Who? Jason Adams When? 2:53 PM
Labels: Neko Case

Did you ever hear Case Lang Viers? The three put out a very nice album some years back. I recommend it. I didn't know who Viers was but liked her solo stuff. I live for Lang, of course.

Still not feeling comfortable going to concerts, but for Neko I'd make the rare exception in a heartbeat. I've seen her a few times and besides her amazing voice, I was always puzzled that - between the melancholy of her songs - she can be very funny and so at ease on the stage, really brightening up everything around her.

Shwany -- yes love that album! I knew LV beforehand but not well, and that album made me a big fan as well

Tom -- Yeah Neko's SOOOOOOOO good live, THAT VOICE, and her stage repartee esp with Kelly Hogan is always a highlight. I adore her