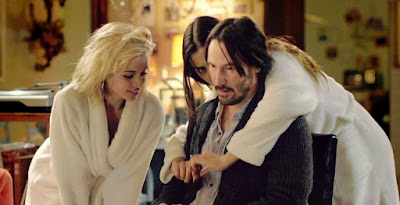 Bel: It's like destiny that we were meant to meet.
Do you believe in destiny, Evan?
Evan: I'm an architect, so obviously I believe in things
happening by your own design.
Bel: Well... I do. I don't think people just pick randomly.
I think that, if we are here together, it's because there's
something we have to learn from each other.

A happy 50th birthday to Eli Roth today! Listen, I don't miss the Aughts era of "Bro Horror" anymore than any sane person would, but I still maintain that Eli Roth's early films -- meaning the original Cabin Fever and the Hostel movies -- were smarter about the xenophobia and sexism that they've been bluntly labeled with as of late. I still think those movies were sending up our shitty American instincts more than they were being a straightforward indulgence of them. That said I'll admit I haven't watched them in a decade, so maybe a re-watch would disabuse me of my romantic notions towards them? But he still made Knock Knock in 2015 and that movie's feminist as hell, and presaged the #MeToo movement pretty smartly. Plus Cate Blanchett loves working with him -- she's re-teaming with Eli for his Borderlands video-game adaptation next, alongside Jamie Lee Curtis and Haley Bennett and Gena Gershon and Cheyenne Jackson and Edgar Ramirez! (Not to mention it was co-written by the dude who made the phenom Chernobyl series!) Oh my! So who are you to question Queen Cate? In summation...

I agree I liked Roth's exposes on American entitlement. But I still think the best way to state that, is through celebrating other cultures/other ways. His use of xenophobia merely reinforces it. I still love the gore and shit, but his films lock him into corners because he has to have pure villains.