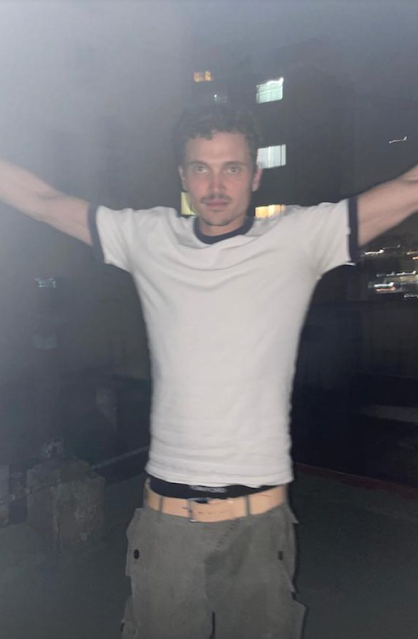 There is a photo of our personal It Boy Karl Glusman that I never got around to adding to my ongoing Karl Glusman Twitter Thread -- you're welcome! Actually I don't know if you're thankful at all -- I sometimes think my obsession with Karl isn't shared by but a few, although that could just be my boyfriend's aversion to the actor. Whatever! If he's all mine then so be it, as long as he is also all "people who make the movies he stars in" too, because otherwise I won't matter. I'm not, unfortunately, the one giving him his jobs. Speaking of! I'm rambling about Karl for a reason -- the first teaser for his upcoming thriller called Watcher has arrived via the fine folks at IFC Midnight, who're releasing the movie on June 3rd.

Also starring Maika Monroe of It Follows and The Guest fame, Watcher is about a young beautiful married couple who move to Bucharest and fall apart under the watchful eye of a wall of neighboring windows. I saw this movie at Sundance and I quite dug its stylishness and DePalma-esque verve -- I wrote my thoughts on it right here for Pajiba. It is from a first-time filmmaker and you feel that at times, but there's a ton of promise in it -- well worth seeking out for one sequence on a subway train alone. And Karl looking like Karl, natch. Here's the trailer:
Who? Jason Adams When? 12:29 PM
Labels: horror, Karl Glusman, Sundance, trailers