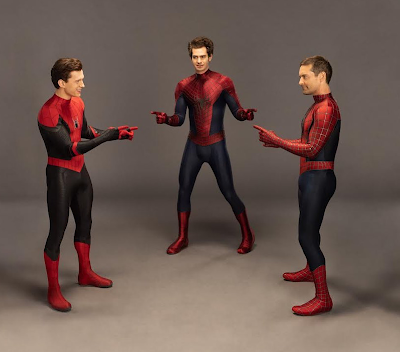 Mr. Holland (Tom, that is) just dropped this photo on Instagram -- uhhh, spoiler alert for the latest Spider-Man, although if you've made it these many months using the internet without having this spoiled for you and it's also a thing you care about having this spoiled for you I owe you more than a "spoiler alert," I owe you like one thousand dollars -- which is of course playing on the famous Spider-Man meme that has three animated Spider-Men in costume doing the exact same pose. I am not a big enough nerd in this respect to actually know the origin of that meme -- I think it's from a cartoon? If any of you want to explain its origin to me and save me from a google (a google that will never happen) I'd love to hear it! Anyway, we must obviously poll.
bike tracks
Who? Jason Adams When? 11:00 AM
Labels: Andrew Garfield, gratuitous, Tobey Maguire, Tom Holland, Who Wore It Best?

Although he's my third fave Spidey, Tobey is giving off major sexy dad vibes in this photo. But the other two: career highs for both. Tommy is a box office draw and Andy is an ACTOR. It's Spider-Man's world and we just live in it.

PLEASE tell me you've seen the hunkiness of Tom Holland working out shirtless this past week??? Because I would love to hear your thoughts.