This post hasn't even begun and I have lied to you. LIED. I don't know how we recuperate from this violence, but maybe me spilling the beans will help. You see normally when I do my "Siri Says" series I ask my telephone to choose a number between 1 and 100, and then I give me my five favorite movies from the year that corresponds with the number. That's you, know, kinda the entire idea behind the series. But when I took stock of the archives of this series back in January I realized that I only had 14 out of 100 years left, and to be quite honest it would have taken Siri half an hour at them odds to come up with a fresh number. So I didn't ask Siri! What I did was write the 14 remaining years down on slips of paper and choose the year from that. See?

At least this much is true! I never could have just written "1935" on a random slip of paper or anything -- that would be the work of a crazy person, and you're obviously, hehe, in the hands of the entirely sane here. Only a sane person would spend two paragraphs and what, a good minute of everybody's lives, detailing all of this in minute detail. So yes, the Movies of 1935 is where we're resting our heads this Monday afternoon, and... meh? Not the greatest year for the movies, save stone-cold masterpiece (the first one in my list below) and several solid-enough flicks after that. Tons of very serious literary adaptations this year (David Copperfield, Anna Karenina, A Tale of Two Cities, Crime and Punishment, Peter Ibbetson, A Midsummer Night's Dream) that feel a little musty now. But I dug up some good stuff...
My 5 Favorite Movies of 1935
The Bride of Frankenstein
(dir. James Whale)
-- released on April 19th 1935 --
Captain Blood
(dir. Michael Curtiz)
-- released on December 19th 1935 --
Mad Love
(dir. Karl Freund)
-- released on July 12th 1935 -- 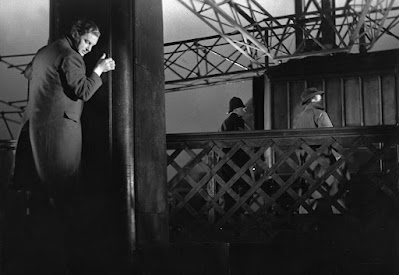 In your list of never seen films, I would recommend David Copperfield, if for no other reason, it's filled with beautiful performances, including W.C. Fields as Macawber, Edna May Oliver as Aunt Betsey and Roland Young's creepy Uriah Heep; Roberta, starring Fred Astaire and Ginger Rogers is delightful and it features Jerome Kerns' lovely score. It's worth the scene where Eleanor Powell does her exercises and dances. Katharine Hepburn should have won her first Oscar for either Little Women or Alice Adams. She gives a beautiful, heartbreaking performance in this family drama, based on Booth Tarkington's book. Barbara Stanwyck is magnificent in Annie Oakley, but then, she's magnificent in everything. Davis won her first Oscar for Dangerous, which was a consolation prize for losing the year before for Of Human Bondage. Sylvia Scarlett is a better movie than either Hepburn or Cary Grant ever thought it was, an early example of a gay film examining cross-dressing. It's clever and funny. My favorite movie of 1935, however, has got to be A Night at the Opera starring The Marx Brothers.

Five very good choices even if none of them would top my list.

Bride of Frankenstein & Mad Love both benefit from strong direction and distinctive performers and performances.

Captain Blood is fun but feels like a dry run for Errol and Olivia’s greater successes in Adventures of Robin Hood and Dodge City. Likewise, The 39 Steps and future Hitchcock suspensers.

The Devil is a Woman has the divinely unique Marlene but is strengthened by the oddly mixed supporting cast of Edward Everett Horton, Alison Skipworth and Cesar Romero.

Of your runners-up I enjoyed Top Hat, Mutiny on the Bounty, Mark of the Vampire and Anna Karenina but struggled through The Lives of a Bengal Lancer and The Call of the Wild. Just like the later remake I thought Magnificent Obsession was a ponderous bore full of pretentious gobbledygook but the young Robert Taylor sure was a looker.

Out of your never seens I don’t know the last two, but all the others are worth the watch. Dangerous is kind of messy and while Bette has her moments it’s not her best work. Peter Ibbetson is also imperfect and somewhat miscast, particularly Ann Harding and the hysterically pencil thin eyebrows on all the women (including a nearly unrecognizable blonde Ida Lupino) in 1890 Paris is wildly distracting.

You’re right this isn’t a powerhouse year like the ones preceding or following it but there is still much to enjoy even if it’s not rich in stone cold classics.

My top twelve in order:

1. The Perfect Gentleman-A hidden gem, a charmer of a comedy with a bittersweet edge. Frank Morgan is the kindly but misstepping father and Cicely Courtneidge the fun, brassy entertainer whose acquaintance he makes. They are a terrific team.

2. Remember Last Night? -An absolutely delightful comic murder mystery that could never be made today since the main characters are all a bunch of incipient drunkards who were too plastered to recall who did in one of their number at a house party the previous evening! It has amazing production and costume design and breezy performances especially Edward Brophy as a dimwit assistant. It’s reminiscent of The Thin Man at times.

3. A Tale of Two Cities-Some of what surrounds them is stodgy, but Ronald Colman and Edna May Oliver make this one of the better mid-30’s classical adaptations. Isabel Jewell’s small role as the doomed seamstress is beautifully done too.

4. Thanks a Million-Political satire musical wherein down on his luck singer Dick Powell finds himself swept up in a race for governor.

5. Hands Across the Table-A great showcase for Carole Lombard as a gold-digging manicurist with a good heart who teams with broke playboy Fred MacMurray to better their situation but then love gets in the way.

Runners-Up:
Alias Mary Dow, The Bishop Misbehaves, The Bride of Frankenstein, Captain Blood, The Case of the Curious Bride, Curly Top, David Copperfield, The Devil is a Woman, Eight Bells, Every Night at Eight, The Gilded Lily, The Girl from 10th Avenue, The Goose and the Gander, Hitch Hike Lady, If You Could Only Cook, Les Misérables, Mad Love, One More Spring, The Passing of the Third Floor Back, Ruggles of Red Gap, Seven Keys to Baldpate, Show Them No Mercy, This is the Life, Turn of the Tide, Two for Tonight, Under Pressure and The Whole Town’s Talking

My my, that last pic is quite...phallic.