The Criterion Can't Help It 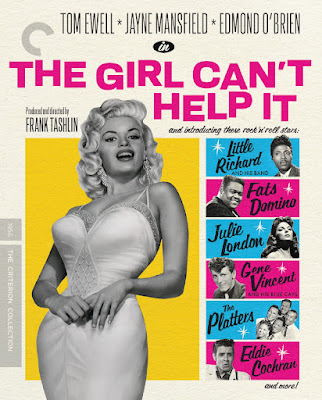 I wondered over the weekend if Criterion would announce their new titles during a holiday weekend (since they always make them on the middle of the month) but we got our answer today, in the form of their April announcement. Big slate for April too, with six films hitting their collection, starting with Frank Tashlin's 1956 Cinescope jukebox musical The Girl Can't Help It, starring Jayne Mansfield in her first role as a gangster's moll that a music producer tries to turn into a star. I have only ever seen part of this movie before on TCM one time, so I look forward to taking it in whole, especially the performances by Little Richard and Fats Domino and all the rest of the rock babies apparently captured therein. 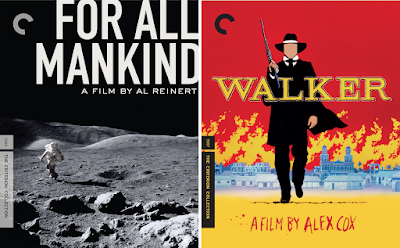 Next up is Al Reinart's 1989 moon landing documentary For All Mankind, which tells the story of the 1969 Apollo mission with a soundtrack by Brian effing Eno -- this one's getting the glorious 4K treatment, to boot. Then we have British filmmaker Alex Cox's 1987 hallucinatory western Walker starring Ed effing Harris -- never seen this, have any of you? It sounds fascinating and weird and 1987 Ed Harris is some pretty prime Ed Harris. 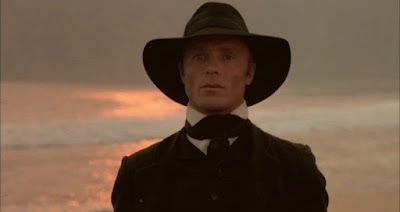 Next up (lots of 80s movies in this announcement) is Bertrand Tavernier's 1986 jazz flick 'Round Midnight, about the jazz scene in 1950s Paris, called by many the definitive movie about that music. (Have to admit I'm not the world's biggest jazz fan so I wouldn't know.) Next up is Eyimofe (This Is My Desire), a 2020 Nigerian film telling the story of two strangers trying to restart their lives in Europe. And then there's Vittorio De Sica's follow-up to Bicycle Thieves, 1951's Miracle in Milan, which is described as a whimsical comedy about a shantytown full of characters defending their way of life from greedy developers. I love that Criterion can still surprise me with their picks like this, and give me so very much to look forward to seeing! Make sure to click on over via the links I shared to read more about each release!

I purchased Miracle in Milan a long time ago on laserdisc if you can believe it. It's quite an amazing little film. It contains the flying bicycles that inspired S Spielberg to do the same in ET. And it has some very naive but poignant points about racism.
When I looked at the criterion releases, I came to your site guessing you would put The Girl Can't Help It out front and I was right. Haha. That's the one I want to see most. And I consider For All Mankind to be a horror doc. The footage of the moon, for me is terrifying. It basically places you on a dusty dead rock in an empty black abyss. And being there, the need to get back to earth feels so urgent. I can barely watch it.

I actually had a tough time deciding if I was going to start with TGCHI or FAM on the post, but the fact that Girl has a John Waters interview on its special features pushed it over the top.

I've never seen FAM but your description of the Moon falls in line with how I've always felt about real space travel, which is NO THANK YOU. I didn't totally love FIRST MAN when it came out in 2018 but one thing I think it got across really well is how DERANGED it is to strap yourself to the side of a rocket and shoot yourself into outer space. It's terrifying!