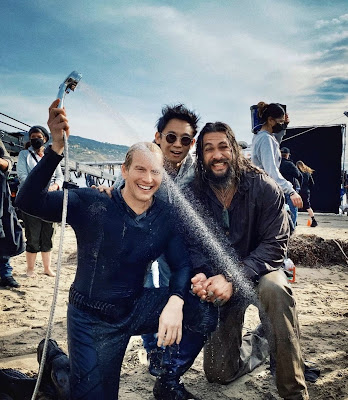 Even though this picture needed to be about a dozen times sluttier -- you can't even give us wet white tank tops? -- it is a photo of Patrick Wilson and (the now single!) Jason Momoa (and Aquaman director James Wan) celebrating the end of shooting their Aqua-sequel by dousing themselves, so I must post it all the same. You can tell they're all dunderheaded straight dudes because this is some half-assed thirst-trappin'. Anyway I liked about 50% of the first Aquaman an awful lot -- it had what ammounted to a Nicole Kidman Swiffer Commercial Fight after all! -- so I hope the sequel's even nuttier, and I also hope that the cancelation of the spin-off about those "Trench Monsters" means the "Trench Monsters" will show up here again, because that remains one of the greatest superhero movie action sequences ever put on film.