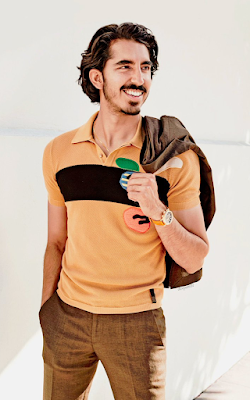 While we sit back and watch with our typical, familiar, resigned horror as the Awards Awarders get it all wrong again this year by totally ignoring David Lowery's towering achievement The Green Knight in basically every category -- this astonishing movie should be up for everything dammit (here's my review) -- at least we get news like today's that Wes Anderson is putting that movie's megawatt movie-star Dev Patel in his next project. And with great company -- Benedict Cumberbatch (who probably will be rightly nominated for Best Actor this year for The Power of the Dog) and Ralph Fiennes and Ben Kingsley will all be joining Dev in Wes' adaptation of the Roald Dahl story The Wonderful Story of Henry Sugar. This is of course Anderson's second Dahl adaptation, coming 12-ish years after he made the masterpiece Fantastic Mr. Fox, but I'm fairly sure this one unlike that one will be live-action. So we get to see Dev! That's nice. Here's what Henry Sugar is about in case you've never read it:

"Henry Sugar, an independently wealthy man who enjoys gambling, finds and reads a doctor's report on a strange patient the doctor met while stationed at a hospital in India. This patient, who called himself "The Man Who Sees Without Using His Eyes", had the ability to see even after the doctors had medically sealed the man's eyes shut and bandaged his head. The man was part of a circus act and used his ability to make money. When interviewed in more detail by the curious doctors he gave an account which they wrote up. The man claimed he had been interested in magic all his life, and managed to study with Yogi Hardawar in India, by which he develops the ability to see through thin objects such a paper or playing cards, and can see around solid objects such as a wooden door if he is allowed a finger or hand around it. The doctors decide the man could be of great benefit as a teacher of the blind, and return to the circus, only to find the show canceled, when the Man Who Sees Without Using His Eyes has died. Henry realizes that the book contains a detailed description of the meditation method used to gain this ability; he steals the book and then decides to try to master the art described. "

(via) It goes on from there -- I think this story is plenty enough for a full film, given the way Wes fleshes out full worlds from small details, but Deadline is saying the movie will actually be an omnibus of three stories; Henry Sugar is you see actually a full short story collection, with six other unrelated stories included. You can see what they all are at this link. We'll have to see how Wes structures this, if the stories overlap or the film is an anthology a la his most recent triumph The French Dispatch.

Was about to say that this Wes Anderson news seemed too fast after The French Dispatch, that he is one of the few filmmakers that I value taking time in between projects because of what a monumental design feat each one is, then I remembered that Dispatch was filmed in 2018 (wtf) pic.twitter.com/l5GfrG4B9w

Wes is planning on filming Sugar this fall, which makes this a crazy fertile and profuse period of work for the director since Dispatch just came out (after being filmed in 2018 and delayed because of the pandemic) and he's already filmed another project, the one called Asteroid City that we know very little about save it's apparently a love story and that it stars, besides the usual cast of Anderson regulars, Tom Hanks and Scarlett Johansson and Margot Robbie, plus Rupert Friend (who did have a small adorable role in Dispatch) and Maya Hawke, the latter two seen on set below: 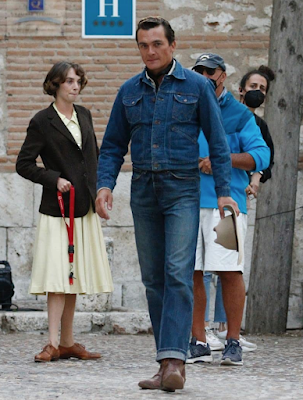