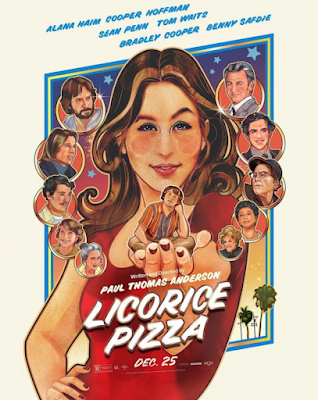 Although Paul Thomas Anderson's Licorice Pizza has been playing on New York and Los Angeles screens for a few weeks now it's just spreading out to those other places, you know the ones -- maybe they're your places even! -- tomorrow, and so I have written up some thoughts on the movie today over at Pajiba. I dug it, as you'll see when you read the review, but I will admit here that of the three "romances" of PTA's that I name-check in the review -- meaning besides this one Phantom Thread and Punch-Drunk Love -- it's a firm number three. And if I started ranking PTA films overall it'd drop down even further. But then Mr. Anderson (holla Matrix) is a top three filmmaker for me and I don't think he's made a single bad film so let's not take these ranking things too seriously. Terrific flick!
Who? Jason Adams When? 2:27 PM